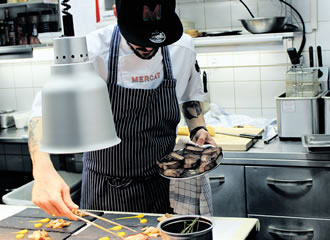 The waitress greets each customer who steps through the door of Mercat. It is a windy, finger-numbing cold outside but inside it is an easy Mediterranean evening: the combination of warmth, foodies of all ages chatting energetically, and a dash of turquoise on the walls is reminiscent of Southern Europe, a vibrant restaurant by the ocean. The warmth and Southern European vibe beckons the desire for a smooth glass of wine, the cold outside just about forgotten.

I arrive for the interview earlier that day. I follow owner Manu Torchio down the hall, past the turquoise walls, the bar to my right and tables for two to the left, past a somewhat overly jovial Spanish man with a pan painted on the wall and into a smaller room with just one table.

Torchio introduces this as the 'chef table'. The room has an aquarium. Yet rather than opting for a live show of fish, this restaurant decided to give its customers a circus of chefs: one-third of one wall is a window into the kitchen. An excellent upgrade from the open kitchens we are familiar with, you can almost touch the 'modern'.

Into the Spanish kitchen

Mercat is not Torchio's first project. He also owns Patrona, the popular semi-fine dining Mexican restaurant, and the Mexican street food takeaway joint Cholo. He co-owns the restaurants with his girlfriend and her parents. They also have a taco truck Tacobot that operates in the summertime.

Torchio is a chef, businessman, designer, builder, and father. He has designed and built the restaurant himself, with the help of his girlfriend's father. But from his tattooed arms to the way he speaks about the 'décor' and how a plate should look, it becomes clear that he is first and foremost an artist. At Mercat he uses this skill to draw together traditional Spanish food and modernity.

The restaurant's namesake means 'market' in Catalan, paying tribute to the Catalonian and Basque flavours they use, and Torchio's years spent working in Barcelona and Giorna. 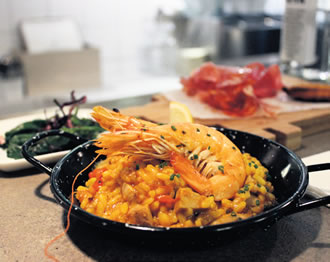 The universal notion of tapas is that it is a portion of food; a plate with olives, a plate with Manchego. Simple.

"That's really boring. No decoration, plain as that," comments Torchio, "Spanish tapas are the same flavours all the time."

The idea of Mercat is to bring something else. Something a little finer, with a modern touch. To Torchio, that modern touch means taking flavours from around the world, and making it Spanish by using the Spanish tapas as a base. Basic plates; different flavours.

"We play with Asian, Mediterranean and Mexican flavours, and do the preparation in a better way. We add some deco so it looks a little bit finer. We play a lot with colours. You see it and you think wow, I want to eat that." All the recipes come from Torchio's imagination, inspired by the time he spent in Spain and, of course, with some Latin influence.

He also wants the food to be of high quality. Everything at Mercat is made on site, and a lot of products are free range and from organic farming.

Torchio was inspired to bring new concepts to Helsinki since he moved to Finland six and a half years ago. In his opinion, there was a lot missing in the culinary scene.

"This was the most boring place on the planet."

"We have an awesome charcoal oven, it gives a really good flavour," he adds.

Despite Torchio's relaxed demeanour, the restaurant didn't have the smoothest of beginnings. The restaurant opened in November with barely a whisper.

"We started a little bit with the wrong leg," says Torchio. They took too long to open; people were waiting for the place to open for months, and once it finally did, it did so quietly. People are only slowly discovering it.

Another challenge was finding the right staff. Torchio says he first hired a fine dining team, but the portions had been too small to justify the prices, a critique mentioned in earlier reviews.

"Of course if you pay 8 euros and you have one pea, it's like 'what the hell?!' you know. Even if the flavour is amazing people don't want to pay that."

So Torchio took back the kitchen, and a new team who he's sure will follow his line. Since then, he says, they've gotten much more positive comments on TripAdvisor and TableOnline.

Testament to this, when I return for dinner later that day the place is bubbling like a freshly opened bottle of Cava. I was expecting a quiet evening; a few passers-by feeling adventurous. Instead, by 9 pm every table is full.

I tried four tapas that arrived from the kitchen one by one until I had a meal in front of me. First were crunchy pork cracklings with strong pineapple flavoured syrup on the side. Next a plate of ham, but beyond the beautiful way the thin flakes rested coiled on the wooden slate there was nothing particularly new about the dish. It did, however, come with three slices of bread with a delicious, garlic and tomato paste. Third came peppers, and the last addition to my now very colourful setting was paella.

The paella was so smooth. The mussels were soft and tasted like the ocean they came from, bringing the dish back to the Spanish palate. If you want something different come here for the paella, a glass of the fresh Spanish white Frank Massard Herbis Verdejo 2013 for example, and the ambiance.

I finished my tapas at a leisurely pace, and upon leaving, the restaurant has significantly quietened down. A few tables still hold customers enjoying their last glass of wine, not yet willing to face the cold reality outside and happy to stay in this Mediterranean corner for a while longer.