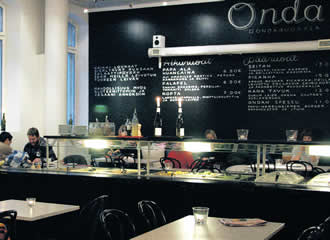 An ambitious start for this new international restaurant in Kallio.

In Latin America, onda is a wave, or a vibe. It is turquoise water awoken by a lazy warm afternoon wind, its surface the pinks and purples of the sunset, its composed movement reaching for white sand. Like a wave, a good vibe has the ability to defy the confines of time and allow a moment to last. In Helsinki, onda is a spacious room. Its walls and windows stretch high, a buffet table sits at its centre and its tables are dressed in tablecloths woven in shades of pomegranate, mandarin and avocado. Candles burn slowly in dark bottles and music is trumped by talk.

The restaurant is owned by three friends, Peter Schneider, Jussi Koski, and Maija Talas. A relatively young trio for having opened their own restaurant, they are all born between 1983 and 1985. Their youth may be a factor in the restaurant's easy-going atmosphere. It may also explain the eager culinary experimentation Onda has seen so far. When we sit down with Schneider, the restaurant had just celebrated its eighth week.

Onda's beginning came with Line Café's end. Talas had been working at the declining café, when the owners, knowing her boyfriend Koski was a chef, suggested that they start their own restaurant. Why not, they thought. They called Schneider knowing he had also dreamt of opening his own restaurant, and thus began project Onda.

The restaurant's swift start has in part been a community effort. From building the couch to painting the walls, Schneider says they have a lot to thank their friends for.

Koski and Schneider had attended chef school in Peru in 2008, and have worked in the same kitchen for a number of years. They agreed on flavours and how things should look. Koski and Talas have travelled a lot as well. So, what do they want to bring to the culinary scene in Helsinki? In short: good food. 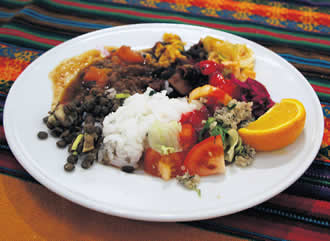 From Turkey to Peru

Their website states that the theme of the restaurant is 'international', so I ask Schneider to explain this ambiguous description a little bit more. He tells me that they have flavours they like from around the world, and combine them on one plate. Rather than going with original recipes, they create their own. Everything is also handmade, he tells me.

He tells me the major influences are mostly from Peru, because the Peruvian cuisine is vast, a blend of cultures. So, why not stick to Peruvian style, I wonder.

"Because then people would come and say, 'no, this is not Peruvian style'," laughs Schneider. He adds, "We don't want to be exactly one thing."

They do have a Peruvian Saturday brunch, however, showing their respect to the varied cuisine. Other culinary inspirations come from Syria and Turkey, Schneider himself having lived in Istanbul for a few months. A Syrian friend helps them with the Syrian cuisine. Adding to the global mix, Schneider and Koski also took a Thai food course together when they were in Peru, which is also a clear staple in their 'international' palate, with lemongrass, coriander and fish sauce.

In the future they want to introduce the internationality to their brunches. They'll invite their Syrian friend to hold a Syrian brunch, and other chefs to introduce food from around the world.

Not only is their food tricky to pin down, the trio wants to have that freedom over their space as well. They want to make their space a cultural locale. They have already begun with an art gallery, because the space was already perfect for it. It had the lighting and wall space. In addition, the trio knew a lot of artists who were looking for a place to exhibit their work.

They would also like to host a musical guest every Friday evening. People enjoy the food more when they listen to music, Schneider says. He is passionate about the connection between music and food.

"The music is actually part of the food. When you make the food and you listen to a certain kind of music it makes you in the mood," says Schneider. "We always listen to Turkish music and it evolves the food. When we listen to music we get the right spices."

They have seen a lot of happy customers over the few weeks they've been open. Schneider would like to attribute this both to the good food, music and the relaxed atmosphere. Their target audience, he tells me, is anyone who appreciates the food, music and mood.

At the moment, their concept is still evolving. Their current challenges are about developing their flavours, their art gallery and bringing music in to the restaurant. Schneider predicts that in the future, the challenges will be different, when their customer base grows. But given the state of the restaurant, the trio have a lot to be proud of already.

"It's funny to do something on your own and people really like it," admits Schneider.

The atmosphere is relaxed yet energetic, and my plate is full of colours. One thing to note, however, is that it's not a place to find a calm quiet corner. The high ceiling, which has a high probability of being acoustically cooperative, amplifies chat from all corners.

Bueno onda means good luck or karma, and it appears that is something this restaurant has certainly enjoyed. The name was chosen so as not to be attributable to any language, holding true to their international 'rule'.

"And we have four windows here at Onda," Schneider laughs.