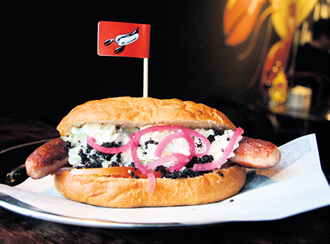 IT'S DINNERTIME. Customers step through a heavy door, and descend a small set of stairs to enter the basement like interior of Kaartin Hodari & Hummeri (or "Hotdogs & Lobster"). Before them is a scene seldom found in Helsinki: wearing hoodies, the youth stand in line to the right, waiting for hot dogs to take away. At a table to the left, in trousers and blazers, twenty-somethings munch on parmesan and truffle fries. At another table, a couple enjoy a glass of champagne while they wait for lobster. Yet at Hodari & Hummeri, this happy melange is a regular evening.

The restaurant, situated on Pieni Roobertinkatu 2, opened its doors in mid February this year. It is owned by Timo "Lintsi" Linnamäki, Sami Angelov, and Henri Alén, celebrity chef who secured his seat in the Finnish culinary hall of fame following a canned tomato incident in January. Alén had tweeted his "Mutti sauce" recipe, based on Mutti branded canned tomatoes – emptying shelves of that brand across the city. The trio are no strangers to the restaurant scene – they also own restaurants Muru and Pastis.

Linnamäki describes the concept of Kaartin Hodari & Hummeri as "fast food in a new way", using the best quality ingredients, and making everything from scratch – from the mayonnaise to the buns. After the preparation, assembling the dog is quick.

"Everybody eats fast food sometimes", Linnamäki says with a smile, "but the thing is to make it proper."

How it all began

The idea of starting a hot dog restaurant came from Alén, after a holiday he spent in the USA. For their Finnish project, they decided to add a twist.

"Street food is a growing trend in Finland. Everyone's doing hamburgers so why not a hot dog?" says Linnamäki.

The unusual choice of adding lobster to the menu was simply because it sounded "somehow funny".

"We wanted to testify that you can fill the bun almost with everything, it doesn't have to be only a sausage," says Linnamäki, pointing out that there is a nice contrast between the hot dog and the lobster, the latter being traditionally associated with fine dining. "It doesn't have to be a Michelin star restaurant [to serve lobster]!"

It started off as a crazy idea.

"And it worked. I was quite sceptical before, because there is also sausage in the dog. And it works actually amazingly good. That made me believe in this idea that you can really be a little bit crazy with the dogs," says Linnamäki.

But not all their crazy ideas have worked.

"We tried to make a mac and cheese dog. It sounds cool but it didn't work. It was messy and it didn't look good at all. It was a very good idea; there were many good things in that idea. [But the macaroni] was too heavy and fatty. No – forget it!" he laughs. 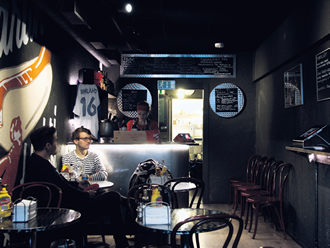 The concept of street food is: easy to eat, quick and something that can be taken away. Linnamäki says it's a trend that's only recently come to Finland, with the whole food culture still young.

"I think [street food] was the natural second step in gastronomy in Helsinki." The first step was the casual bistro scene, offering good food but also a relaxed atmosphere, such as their restaurant Muru.

"Then came street food and street gastro which is one step lower again, and easier if you're in a hurry."

Linnamäki predicts the next step may be good ethnic cuisine, a sector which he says is still developing in Finland.

"Fine dining is not necessarily dead but it's going to come again," he adds.

Their street food concept has been developed and inspired by travels, keeping up with trends and of course the imagination.

Starting a new restaurant – and a fast food one at that – has not come without its challenges for the fine dining trio.

"We thought it would be easy and simple. We thought it's just a hot dog and it's simple to make – what do you need, one oven and something like that. But it wasn't."

"You have to keep the costs low and still use high quality products. People are not ready to pay too much."

Linnamäki compares their prices to Starbucks, where "you pay 7 euros for a café latte. It's a cup of coffee; it's a cup of water with milk. When you compare it to a handmade hot dog, there's meat in it and everything."

In vogue at the moment is the hotdog with malted pork. If you want to give it a shot you'll have to hurry – their menu changes all the time. Another popular dish is the lobster dog, it's something different, and of course their namesake.

I tasted the baby lamb hotdog, which was delicious. In addition to the lamb sausage, it was filled with tsastiki, olives, feta cheese and red onion. All the flavours were present and although surprising in a hot dog setting, worked perfectly. I also had the parmesan fries – a perfect step up from classic fries. The food came quickly. This is indeed the modern version of the diner. I would happily be back, and even spend a longer time with a couple of champagne glasses between me and a friend in this charming joint.

Needless to say, I left happy as a clam – or should I say baby lamb.