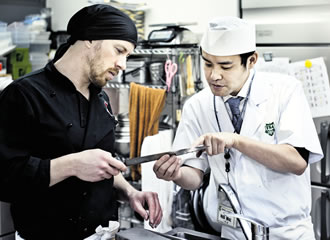 Finland's culinary scene has only recently diversified and Hanko Sushi has confidently ridden that wave of expansion. Co-founder Mika Laakio fell in love with sushi many years ago, having lived six years in Japan. He had been ready to steer the sushi ship to Helsinki in 1995, but explained that "when I moved back, Finland wasn't ready."

Back then, sushi was still a luxury. For it to appeal to everyone, Laakio felt sushi still needed time.

Laakio and his partner decided to test the waters in 2008 in Hanko. "It was just kind of a good idea, it's a great summer city," Laakio recalls. "We wanted to test how it goes, so we can produce something that people like. And sure enough we did!" And so began the story of Hanko Sushi.

Now Hanko Sushi has grown from a small shop in Hanko to having over 15 restaurants around Finland, chiefly in Helsinki. Such is their authenticity that they recently collaborated with Japanese celebrity chef Hiromitsu Nozaki when he visited Finland in August.

Hanko Sushi used the acclaimed chef's recipe and design to create a number of lunchboxes that were produced by their head chefs. The lunchbox included not only sushi, but rice seasoned differently and mixed with different flavours that resembled risotto, but with vegetables and seasoning. This mix of Japanese kitchen and sushi created a perfect opportunity for Hanko Sushi to gauge the public's reaction to other types of Japanese cuisine.

"This is kind of a start that we can have more events or cultural exchange with Japan," says Laakio. "In March, one of our chefs went to Japan for three weeks to learn. He went to a chef school and went to meet special knife sharpeners." Meeting Nozaki was a great opportunity to continue a cultural exchange, and also to learn from him.

“I have to say we’re students,” Laakio says. “We’re listening and were humble for his ideas. He has such a strong experience – he’s a sensei, a teacher, so we want to maybe learn the world of thought of good, perfect food and its presentation – you eat it also with your eyes.”