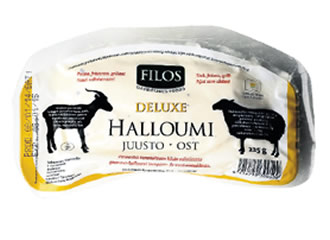 Halloumi is often folded and should be opened up before slicing to stop it from crumbling on the grill.

What is a good halloumi cheese like? It must taste of goat's or sheep's milk and have the right level of saltiness, a hint of mint and a structure that does not fall apart. When heated, the cheese should not melt or become stringy.

These guidelines were given by Akis Staboulis, a Greek-born teacher at the restaurant school Perho.

Staboulis may not share halloumi's Cypriot roots but has a soft spot for this savoury delicacy.

He is a font of information on halloumi. For example, if the cheese falls apart when sliced this might not be due to any flaw in its texture. Traditionally, the cheese is folded over during the making. Many shop-bought cheeses have a fold, which may be difficult to spot. When the cheese is straightened before cutting it, the slices do not fall to pieces on the grill.

Traditionally a sprig of mint has been placed in the fold which is why the cheese even nowadays comes with a hint of this herb.

In most halloumi cheeses available in shops, some cow's milk has been mixed with sheep's and goat's milk to soften the taste. Another factor is that cow's milk is more readily available and costs less. Demand on halloumi has grown steadily over the last few years, with Cyprus exporting more than 11,000 tonnes of the cheese annually, 400 tonnes of which comes to Finland.

Staboulis says that one explanation why Finns have taken to halloumi in such great numbers is that we already have a local counterpart: leipäjuusto, or the Finnish squeaky cheese. "When heated, both halloumi and this Finnish cheese squeak in your teeth."

While Finns mainly eat halloumi during the summer grilled, in Cyprus the cheese is used in a much more versatile manner. It is used as an ingredient in soups, grated on pasta and eaten as a cold dessert with watermelon. In Cyprus, numerous different types of halloumi are available, some of which are a far cry from the halloumi Finns have come to know, says Staboulis. Some of the cheeses are soft while others are hard and some have a low salt content while others are very salty. Excess salt can be got rid of by rinsing the cheese in cold water for an hour, advises Staboulis.

Halloumi's saltiness has its roots in history.

The first references to halloumi date back to the 16th century. When goats and sheep had their young in the spring, milk was in rich supply and the best way to store it was to make cheese out of it. Salt acted as preservative.

In Cyprus, both mass-produced and homemade varieties are available. In the Helsingin Sanomat taste test, the winner was one of the handmade cheeses, which, despite its hefty price tag, was definitely worth trying out.

Here is the test result.