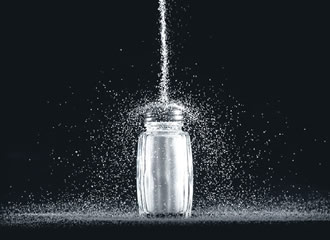 Only around four per cent of restaurant chefs stick to amounts given in a recipe when seasoning food with salt.

A study carried out among chefs in the spring reveals that most of them add salt without measuring the amount they put in. Altogether 92 chefs from all over Finland participated in the survey conducted by the marketing company Trust Creative Society.

Laura Toivola, a dietitian at the Finnish Heart Association, finds the chefs' habit of guestimating the amount of salt problematic.

"When there's no knowledge of the meal's salt content, the client can't choose the less salty option."

The survey shows that chefs are well aware of salt's health risks. Up to half of them, however, believed that food eaten at home has a much bigger impact on salt intake than meals eaten out.

But this does not hold true anymore as Finns now get more salt from meals eaten out than from food they cook at home. A study conducted by the National Consumer Research Centre a couple of years ago revealed that Finns are eating out more regularly than before.
Typically, Finns have their lunch at a workplace restaurant, with a survey commissioned by Fazer Food Service at the beginning of 2014 showing that for many people lunch at work is the only proper meal of the day.

Toivola says that the survey suggests that many chefs are not fully aware of the impact they have on their clients' health.

"They play a major role as eating meals outside the home is increasingly common. People should give feedback to their lunch restaurant on the saltiness of the food."