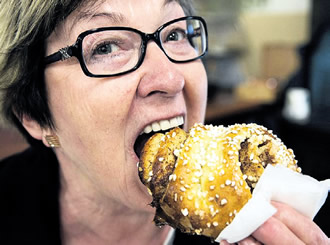 Eight places came up where readers believed they had eaten the largest cinnamon roll of their life. The largest bun was eventually located in Lapland.

The Activity Centre of

The cinnamon rolls of the Activity Centre of The Helsinki Lutheran Parish in Mustasaari used to be even bigger. The size was reduced, because rolls were being tossed in the bin.

"We have a minimum size for cinnamon rolls for sales, and the smaller ones are placed in bags for sales," Manager of Customer Service Sanna Koskinen says.

The reader who suggested the café described the cinnamon rolls as "the size of a human head".

Manager of the cafe Laura Mannonen says that Nostalgia's cinnamon rolls do not fit on a regular bun plate, but must be placed on larger plates. "The goal is to for the cinnamon roll to be insanely big," Mannonen says.

"We are known for our big produce and this is the case with cinnamon rolls, too," says the Managing Director of the Turku-based Café Brahe chain Hessu Martikainen.

"The ingredients used in cinnamon rolls are not costly, so we want to give people their money's worth."

Since the rolls are made by hand, they are sometimes larger, and sometimes smaller.

Backman has a set reply reserved for customers who marvel at the rolls' size: "The other half of the cinnamon roll can be taken home to your loved one".

Kulmakonditoria chain, establishments in Uusimaa and Tampere
Several establishments, for example in the shopping centres of Tikkuri, Myyrmanni and Willa.

"We hear stories of us having the largest rolls," says the chain's manager Nina Halla-aho. The gigantic size is under strict supervision in Kulmakonditoria-cafés. Each of the sold rolls is weighed and must be at least 300 grams.

The fresh and fair-sized cinnamon rolls are the drawcard of Kariranta, too.

"People often describe the cinnamon roll they have here to be the largest they have ever consumed," says one of the café's workers Miia Tarkkonen.

The story is missing Kaisan Café in Espoo, suggested by many readers, due to the establishment's summer break.