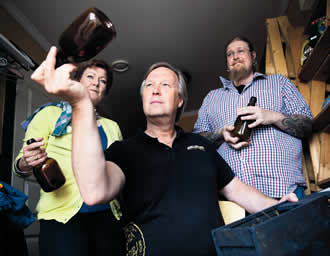 Five bottles of beer were salvaged from a nearly 200-year-old shipwreck found off the Åland Islands in 2010.

FINNS now have the rare opportunity to savour the taste of one of the oldest existing beers in the world – or, something very close to it.

Stallhagen, a brewery based in the Åland Islands, has recreated an authentic replica of 170-year-old beer salvaged from a 19th-century shipwreck discovered off the island village of Föglö in the summer of 2010.

The 5 bottles of beer and 145 bottles of champagne retrieved are believed to date back to 1842—1846. The micro-brewery has developed the recipe for its special brew – dubbed Stallhagen Historic Beer 1842 – on the basis of analyses conducted by the Technical Research Centre of Finland (VTT).

"It's a Belgian wild-yeast beer. The micro-organisms in the beer found in the wreck have been used in the production," says Mats Ekholm, the master brewer at Stallhagen.

The historic beer has been produced at the beer laboratory of the University of Leuven in Belgium because wild yeasts must be processed in a strictly controlled environment due to their propensity to spread. No modern cultivated yeasts were available at the time of the production of the original brew.

The beer tastes fresh and fruity, says Ekholm, and lacks the hoppy notes of contemporary beers almost entirely. "It's similar to wine," he describes.

A limited edition of 2,000 numbered bottles of Stallhagen Historic Beer 1842 will be made available aboard Viking Line cruise ships this week for a price of 113.50 euros per bottle. "The beer has been bottled in hand-blown glass bottles resembling the bottles retrieved from the wreck," says Kristiina Kurki-Suonio, the director of marketing at Stallhagen.

Bottle number 1 will be auctioned off on the Facebook page of Viking Line, with the sales proceeds to be used to fund marine archaeological research. "Further studies must be carried out because only little is known about the beer and its origin," Kurki-Suonio explains.

The origin of the ship similarly remains a mystery.

"Something can be deduced from the fact that the beer was bottled because at the time beer was generally stored in kegs. It must've been a finer beer."

According to one theory, the beer had been ordered abroad for the Christmas celebrations of officers.

While the National Board of Antiques (NBA) reproached the decision to sell the champagne bottles retrieved from the wreck, it has no objections to the recreation of the historic beer. "By recreating a researched beer, it's possible to animate history and to present the food and drink culture of yesteryear," acknowledges Riikka Alvik, a marine archaeologist at NBA.

Shipwreck research, she underlines, should be public and also contribute to historical research.