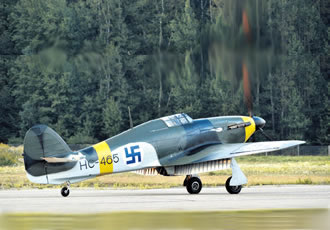 AFTER a five-year break, the Helsinki International Airshow is once again being staged in Helsinki, under a new name on this occasion, to reflect its national importance. And so, Finland International Airshow 2014 is taking over the space at Malmi Airport on Saturday 16 August and Sunday 17 August.

Presenting both Finnish and international airplanes and helicopters, the airshow boasts a number of performers across its two days.

Sweden's Scandinavian Airshow sees the likes of a Catwalk, Viking and WASP taking to the skies. Fellow Swede, aviation pioneer Jurgis Kairys is also on hand for a couple of shows of acrobatic tricks.

Meanwhile, the legendary aerobatic team, the Yakovlevs Team will be flying a custom-Russian super Yak 52 and Yak 50 aircraft.

Elsewhere, the skies will also be hosting Belgians Formation Team The Victors over the weekend.