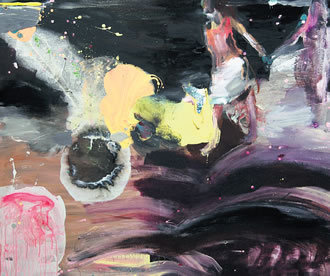 TWO interesting exhibitions are currently being housed at Gallery Jangva until 17 February.

Artist Alina Sinivaara’s exhibition Paintings of Gaia emphasises the importance of the body’s physicality and movement, and different experiences while painting and dancing.

Comprising solely of works created last year, the exhibition moves beyond the artist’s former unease with her changing surroundings, and mankind’s increasing pressure for change and movement of culture.

Now images of construction sites and machines have given way to those of jellyfish, flocks of birds and stratus clouds. The multidisciplinary exhibition observes the idea of human beings existing as a separate part of nature and also the globe within everyone. Offering another interpretation of these themes, dance performances will be staged every Saturday at 16:00, emphasising dance and the language of the movement of visual art.

Having spent two years accumulating the works that appear in photographic exhibition They Left 150 Years Ago, Jason DeBose sought to focus on the largest movement of Finnish nationals to Canada and the United States, which commenced in the 1860s.

Between 250,000 and 350,000 Finns left for North America up until 1920, stepping onto a boat into the unknown. Minnesota, Wisconsin and Michigan saw the greatest number of Finnish immigrants.

Drawing on extensive research that saw DeBose taking photos in over 30 different cities across the States, the project helped uncover the stories of these Finnish-Americans, and their influence on the lives of subsequent generations. Following this residency at Gallery Jangva, De Bose’s work will be exhibited in Jyväskylä and then Syracuse, New York.