Netflix fast became everyone’s go-to to get their TV fix in 2020 and turns out the streaming service is killing it in terms of diversity - we love to see it!

But who is on track to earn the most in their careers? OnBuy.com Movies and TV department wanted to ascertain the 20 highest earning LGBTQ+ actors on Netflix, by looking at the earnings and net worth of top stars, and the results are finally in...

Coming out on top is the star of Twilight Kristen Stewart, with a huge 70-million-dollar net worth.

She is followed closely by RuPaul at 60 million dollars and Gillian Anderson smashing it with a net worth of 40 million dollars. RuPaul was also one of the most binge-watched shows of Netflix, with may re-watching the series during the lock down. Watching streaming services, playing online games and spending money on no account casinos has increased dramatically during the lockdowns and long periods of staying home.

Last on the list is Mj Rodriguez from Netflix’s 2020 hit show Pose; she has a reported net worth of 1 million dollars currently, however we predict even bigger things from her in the future! 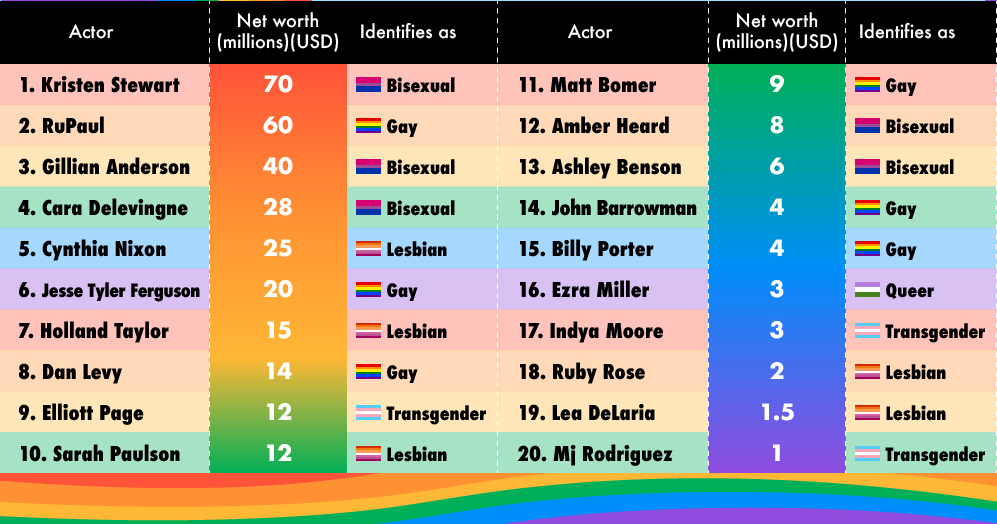 Which members of the community are the most successful?

Where are they most successful?

LGBTQ+ actors earnt a combined 139 million dollars in films compared with a whopping 198.5 million dollars from TV shows, making the TV industry a more successful one so far for the LGBTQ+ community.

Which Netflix Show is Most Inclusive??

The show on Netflix with the highest concentration of LGBTQ+ actors is Pose, with 140 trans actors and crew members and 35 non-trans LGBTQ+ characters - this is the highest number of any TV show in history!

Orange is the New Black comes in second with 17 LGBTQ+ actors and crew.

In third place is Ratched, with 11 LGBTQ+ actors and crew.

Methodology: In order to work out if LGBTQ+ actors earn more in TV or Film, researchers took the top 20 earners (based on net worth) and researched the earnings for their most watched (in terms of viewing figures) projects; then added up all the top earning films and top earning TV shows and found that the top earning LQBTQ+ actors on the list earned more from TV shows than they have from films.