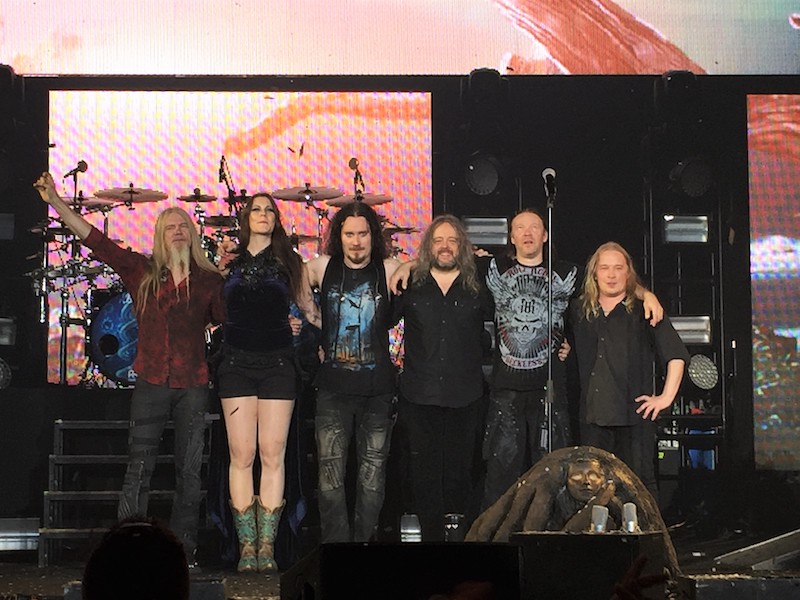 Nightwish at Rockhal in 2015

Nightwish one of the most successful Finnish bands of all time. They will perform in their hometown Kitee in June 2023. Human. :II: Nature. -world tour concert will be seen on Friday, June 16, 2023 at Kitee Rantakenttä renovated baseball stadium. The concert is organized in cooperation with Kiteen Pallo, the city of Kitee and the event production company Nordic Live Productions.

Nightwish has already announced another concert in Finland, which will take place on Saturday June 17, 2023 at Vaasa Lemonsoft Stadium. The Kitee and Vaasa performances are Nightwish's last domestic concerts before the band takes a break to work on a new album. The Nightwish concert in Kitee will be one of the biggest single event nights in eastern Finland.

Tuomas Holopainen, founding member and leader of the Nightwish band, is excited about the upcoming concert in his hometown:

”All band members were extremely happy when we were told about the gig at Kitee Rantakenttä. It will be the last performance of the Human. :II: Nature. world tour, and for me the absolute highlight of the whole round. My hometown, its people, and people from all over the world will for sure create a magical feeling for the event . We are excited, See you there!"

The best-known songs of Nightwish, who play symphonic metal are e.g. Nemo, Sleeping Sun, Storytime, Wish I Had An Angel, Amaranth and Noise. In addition to the keyboardist and leader Tuomas Holopainen, singer Floor Jansen, multi-instrumentalist Troy Donockley, guitarist Emppu Vuorinen, bassist Jukka Koskinen and drummer Kai Hahto will be seen on stage.

"Nightwish concert in Kitee, the band's founding city, has been awaited for two decades. We are really excited to be able to arrange the concert at the renovated Rantakenttä stadium next summer. We thank the band for their trust, and promise to make the June 2023 concert a memorable and unique experience. In addition to Nightwish, the concert will feature a few other bands at the beginning of the evening, which will be announced later," says Tommi Mäki, CEO of Nordic Live Productions.

Nightwish is the pride of Kitee

The story of the worldwide famous band Nightwish has been documented in the Kitee Tourist Information - A Nightwish Story exhibition center, which opened in the center of Kitee in 2020. The exhibition presents the band's journey from a small band project in Kitee to one of the biggest metal bands in the world. The exhibition, which has gained worldwide fame, features rare material that can only be seen and experienced in Kitee.

"A Nightwish Story - exhibition center will be open around the clock between June 15 and 17, 2023. It will be absolutely amazing to see Nightwish perform at Rantakenttä Stadium next summer. The renovated stadium offers an excellent setting for the event, and city of Kitee warmly welcomes all the concert guests," says Kitee city manager Pekka Hirvonen.

The goal is to break the audience record at Rantakettä Stadium

The total capacity of Kitee Rantakenttä baseball stadium is around 10,000 people for the concert. In addition to the 2,800-seat grandstand, which was renovated in 2020, almost the entire baseball field serves as an audience area. The concert is expected to be sold out, which would clearly break the stadium's previous visitor record. The current audience record for Rantakkenttä is 7,773 spectators at the 1996 East-West match. The local major baseball club Kiteen Pallo is strongly involved in the arrangements of the concert.

"We expect stadium capacity of more than 10,000 seats to be filled quickly after ticket sales starts. At the same time, it would be the biggest event in the history of the baseball stadium. Regarding the concert arrangements we will cooperate with Kiteen city, Kiteen Pallo and other local clubs and organizations," adds Tommi Mäki.

"Nightwish is the biggest star in the music world of our region, and this event has a special meaning for Kiteen Pallo, as well as for all the club's partners and fans. We believe that Rantakenttä audience record will be broken with a bang. Years of cooperation with the band members have been seamless, and the upcoming event also shows respect for our cooperation. We are very proud to be from Kitee, and we welcome all Nightwish fans to Kitee for the whole event week", says Kiteen Ball's Mikko Varonen.

Ticket sales for the concert will start on Friday, November 11

Ticket sales for the Kitee Nightwish concert will start on Friday, November 11, 2022 at 9:00 a.m. at lippu.fi. There will be age-restricted tickets and K18 tickets plus various VIP tickets sold for the concert.