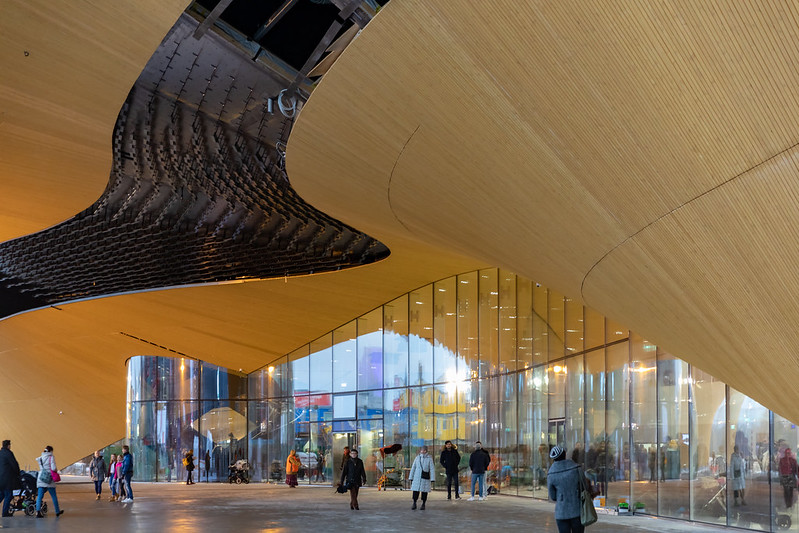 The international lecture series on contemporary architecture curated by Associate Professor Jenni Reuter and organized jointly by Aalto University Department of Architecture and the Museum of Finnish Architecture continues online. In 2022–2023 six architects from various backgrounds are invited to share their thoughts and ideas on current trends in architecture.

"For this season of guest lectures, I have chosen creators whose thinking and works evoke feelings of pleasure, passion and a hope for the future", says Jenni Reuter, the curator of the lecture series.

Andrew Waugh is a Founding Director of Waugh Thistleton Architects, a practice dedicated to delivering beautiful buildings and places that acknowledge their effect on the environment. He is a world-renowned spokesperson for low impact architecture and innovative construction, and lobbies and lectures internationally, communicating the urgent need for change to mitigate the climate crisis. A pivotal player in the global shift towards renewable, bio-based materials, Andrew's innovative approach to design has been acknowledged by many awards including The RIBA President's Award for Research and a Stirling Prize nomination in 2018. The practice is currently engaged on both research and design projects throughout Europe and North America.

"Waugh Thistleton Architects have used solid wood on a large scale. Their works are an example of how buildings can be dismantled, reassembled and recycled", says Jenni Reuter.

Kerstin Thompson is Principal of KTA and Adjunct Professor at RMIT and Monash Universities. A committed design educator she regularly lectures and runs studios at various schools across Australia and New Zealand. Kerstin Thompson Architects (KTA) is a multi-award-winning architecture practice, founded by Kerstin Thompson in 1994 in Melbourne, Australia. The practice is well established as a significant and innovative reference point in Australian architecture and urban design. Known for astute design thinking, KTA designs creative, meaningful and site-responsive architecture that seamlessly combines form, interior and landscape to create coherent and compelling places. Clarity of approach and sensitivity to place are the guiding principles for each and every project.

"Kerstin Thompson's Bundanon Art Museum Bridge is an inspiring example of how a simple starting point can create a building where art, landscape and structures support each other", says Jenni Reuter.

Sebastián Irarrázaval is trained as an architect at the Universidad Católica de Chile and at The Architectural Association in London. He teaches at the School of Architecture of the Catholic University of Chile. He has been a visiting professor at various universities, including MIT and IUAV. His works have been exhibited in various exhibitions and biennials and have been widely published in specialized magazines. He has received various distinctions including the Shenzhen & Hong Kong Biennial of Urbanism and Architecture (2012), the RIBA International Prize (2016) and the RIBA International Fellowship (2018).

"In the works of Chilean architect Sebastián Irarrázaval, rhythm, repetition and a sense of materials create a grounded and effortless architecture", says Jenni Reuter.

"Miller & Maranta belong to the Swiss architectural tradition, where one starts from the location and atmosphere. There has been no need to compromise on the quality of the work or craftsmanship in the construction of the buildings", says Jenni Reuter.

Since 2000, Carla Juaçaba has developed her independent practice of architecture and research-based in Rio de Janeiro. Her office is currently engaged in both cultural programs and private projects. After graduating she worked on the Atelier House, Rio Bonito House, Varanda House, Santa Teresa House, and a couple of exhibition designs. She is now living in London, teaching at Mendrisio Accademia in Switzerland, and is currently a Ph.D. student at ETSAM-UPM-Madrid.

"In her work, Carla Juaçaba shifts effortlessly between the worlds of architecture, art and academia", says Jenni Reuter.

"Pascal Flammer became known to me through his own house (House Flammer), a simple house, where the roof and structures play the main role. The result is minimalist but effortless", says Jenni Reuter.