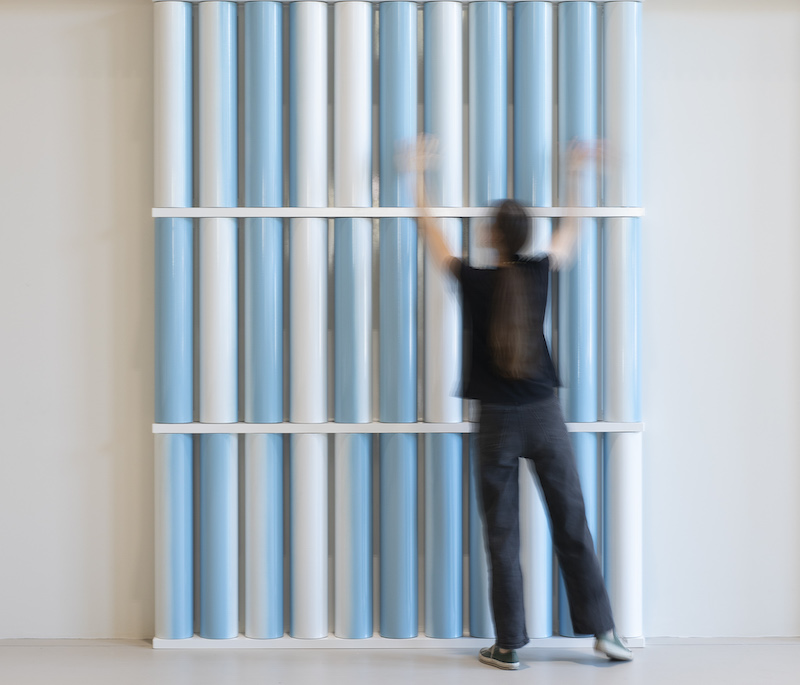 The kinetic installation Rotation by Inka Bell is located in the renovated facilities of Pakila Comprehensive School and Youth Centre. The installation is 2.5 metres high and 1.9 metres wide and covers the wall of the dining hall with cylinder-shaped pieces that can be rotated. The cylinders are painted with two ombre colours: one side is gradient white and the other gradient blue. The installation's visuals change when the cylinders are rotated, as their colours blend into one another. The kinetic installation invites the audience to test and observe how even a small motion can change its appearance. The rotation may produce a random pattern or a calmingly monochrome, i.e. single-colour, surface. Visual artist Inka Bell mainly works in the expanded field of printmaking. In her art, Bell explores the relationship between the two-dimensional and the three-dimensional, through material, colour, surface and repetition.

The renovated Kallio General Upper Secondary School houses a series of four paintings by Karoliina Hellberg, an alumnus of the school. The series of paintings is titled Lilacs, Anemones and Wind, and it is divided into two pairs located in the stairway of the building. The pairs of paintings are placed opposite each other, like a reflection, and they show the same situation as if from two different perspectives. On the second landing, the pair Lilacs, Anemones and Wind: Anemones shows the spatial imagery and highly detailed interiors that Hellberg's works are known for. The impression of abundance is created by the railings, pillars, decorative furniture and ornamented rugs, along with plants and flowers. On the third landing, the pair Lilacs, Anemones and Wind: Lilacs leads the viewer into a recurring theme in Hellberg's paintings: nocturnal gardens and vegetation. The facade of the same building displays the sculpture installation Playing Ball by Pertti Kukkonen. The installation consists of steel globes of different colours, which cast shadows on the wall. However, the shadows do not follow the logic of a single direction of light. Kukkonen is specialised in using concrete in his art, and he has created several works of public art in Finland.

The collection of works Handwriting by Eeva-Leena Eklund spreads to the stairway of Lauttasaari Primary School and Music Institute. The extensive spatial installation consists of murals and separate works painted on metal panels. The layout is very liberal, which is typical of Eklund: the paintings are overlapping in some parts and side by side in others, creating denser and looser scenes. The murals painted directly on the wall surfaces show the squared and lined papers often seen at school; the grids and lines were painted freehand. On the lines, there are sentences and words written in different types of cursive and block letters. The artist collected the texts from the school's pupils. True to Eklund's style, the works painted on the panels have strong and vibrant colours and recurring motifs, such as flowers, animals and abstract fabric patterns.

The Mystery of the Often-Sneezing Octopus by Markus Rissanen can be seen on the facade of the extension of Myllypuro Comprehensive School. The installation consists of ceramic tiles and is based on the mathematical/logical Hex Rosa pattern developed by Rissanen. The pattern consists of a repeating hexagon that is divided into rhombi, i.e. diamond shapes. By varying the shapes of the diamonds and the shades of brown and black, Rissanen has built a continuous rose pattern. According to the artist himself, the ceramic installation can be seen as splashing ink or a diving black comet with sparks flying out, among other interpretations. The first association is where the installation got its name. Rissanen's body of work consists mainly of paintings through which he studies the abstract information diagrams and sign systems used in sciences. Rissanen delved into the mysteries of geometry in his doctoral thesis in which he solved a well-known mathematical problem related to tiles with rotational symmetry.

The facade of Isoniitty Daycare Centre in Kumpula displays a colourful piece by Elina Autio. The installation Rainbow Pen consists of striped aluminium pipes of different lengths, placed side by side, that form an island-like surface on the wall. The premise of the layout is the rhythm of colouring and writing in cursive, which may be random and a little clumsy, but still determined at the same time. The piece refers to the lines drawn with a multi-colour pen where the colours change as you keep drawing. The vertical lines typical of the building of Isoniitty Daycare Centre are repeated in the installation's structure and colours.

Elina Autio has a degree in visual arts from the Academy of Fine Arts of the University of the Arts Helsinki. She also studied in Akademie der Bildenden Künste in Munich. Autio's art brings observations about colour and everyday construction materials together in unique ways. In addition to Helsinki, she has also created public art for the cities of Tampere and Espoo.

The City of Helsinki adheres to the Percent for Art principle, which means that approximately one per cent of the City's new construction and renovation expenses are dedicated to the creation of new public art. In recent years, extensive construction efforts have made it possible to commission art for many public buildings in Vuosaari, Kalasatama, Konala and Jakomäki, among other Helsinki areas. HAM Helsinki Art Museum serves as an arts expert in these projects, and the works are added to the City of Helsinki's art collection managed by HAM.