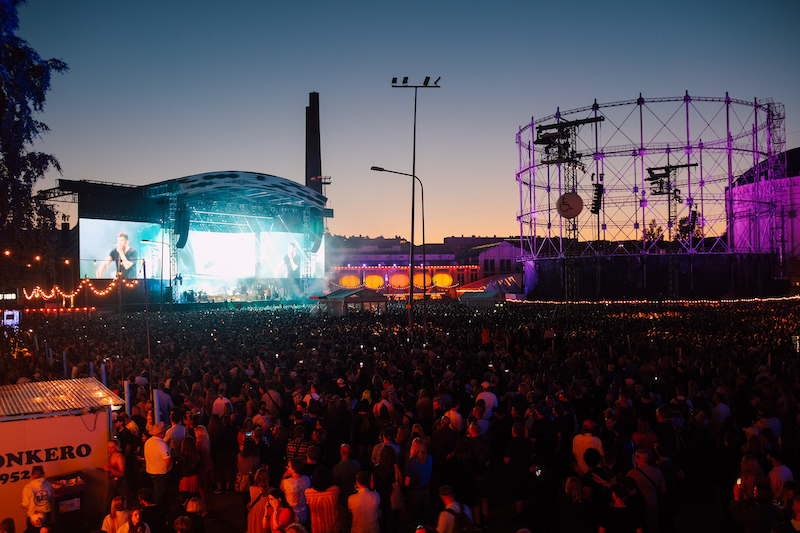 This year, the Flow Festival took place in Suvilahti, Helsinki on the 12th-14th of August. Attendance numbers set a new record high for the festival, after being cancelled two years in a row due to the pandemic.

Between the ten different venues, you could discover everything from world-famous artists to local DJs. In addition to music, the festival featured art, talks, food and junior activities.

Flow Festival gathered both domestic and international top artists to Suvilahti, Helsinki. The sold-out festival gathered a record-breaking 90,000 attendees to enjoy the unique atmosphere during the three festival days.

The Flow Festival Main Stage was located in the heart of the festival area and featured most of the headlining artists. On Friday, Finnish new-generation singer-songwriter Antti Autio opened the Main Stage along with a string ensemble. Scandipop star Sigrid took to the stage a few hours later.

During the weekend, the Flow Main Stage hosted brilliant performances by artists such as afropop superstar Burna Boy, the animated group Gorillaz with their first ever performance in Finland, the ravishing Florence + The Machine, as well as domestic favourites Vesala and Vesta. Getting her name from the Finnish cellphone, the rapper from New York Princess Nokia pumped the stage full of energy and excitement.

One of Finland’s most respected pop artists Chisu threw her last Flow Festival gig on Sunday, freezing her solo career at the end of this year.

On Flow Festival’s Sunday, The Main Stage saw the phenomenal Michael Kiwanuka and the charismatic Nick Cave & The Bad Seeds with their two-hour set charm the audience.

The stage hosted the long-awaited performance by legendary punk band Bikini Kill, the amazing show by anarchist popstar MØ, and the spectacular Fred Again.., who led the audience from wild dances to vulnerable moments.

The FREE.fi Black Tent was heavy on domestic artists, and indeed a gem at the Flow venue.

At the FREE.fi Black Tent Arppa, Yeboyah, Fontaines D.C., and Holly Humberstone were among the crowd favourites. Acid Arab finished off the venue with their thumping live set.

In addition to the big stages, it was not difficult to find unique music and a dancing crowd. Red Garden and Resident Advisor Front Yard had a party going on all weekend with amazing energy among the DJs playing, the dancers and the crowd.

At The Other Sound x Sun Effects, Huoratron Deconstructed and Ánnámáret gathered the venue to its maximum capacity. At the magical ambience of Balloon 360°, spectacular Linda Fredriksson Juniper, dazzling Lxandra, and virtuosic Mdou Moctar played for the enchanted audience.

This year, the festival also compiled the Flow Talks program. On Friday, Flow hosted a panel discussion arranged with Music Finland and six other music industry organizations on advancing a more vigorous and international music industry. The panellists included Finland’s Prime Minister Sanna Marin, Minister of the Environment and Climate Change Maria Ohisalo, and chair of the Parliamentary Group of the National Coalition Party Kai Mykkänen, among others. Additionally, on Sunday, Flow arranged the Sustainable Meal panel, in which a jury selected the most sustainable and delicious dish of Flow’s restaurants. The crowd’s favourite Sustainable Meal was also chosen by popular vote. The jury selected as their winner LoiLoi’s Tofu Okonomiyaki, and the crowd's favourite was The Glass’ dish Common Roach & Potatoes. The jury of the Sustainable Meal panel consisted of member of parliament Emma Kari, food author and chef Meri-Tuuli Väntsi, and the Head Chef of restaurant Grön Janne Keskevaari.

The Finnish public service broadcasting company Yle and the French-German public service broadcasting company Arte have recorded shows and atmosphere at Flow during the weekend. Part of the recordings have been live streams, but some of them can be viewed in Yle Areena. Recordings of Gorillaz, Burna Boy, UMO & Jimi Tenor, Kit Sebastian, Vesta, Freddie Gibbs, Sigrid, and pehmoaino can be watched here.

Flow Festival takes place in Suvilahti, Helsinki, on the 11th–13th of August, 2023. A limited edition of Super Early Bird tickets for 2023 went on sale on Monday the 15th of August at 9 am and can be purchased from here until Sunday the 21st of August.