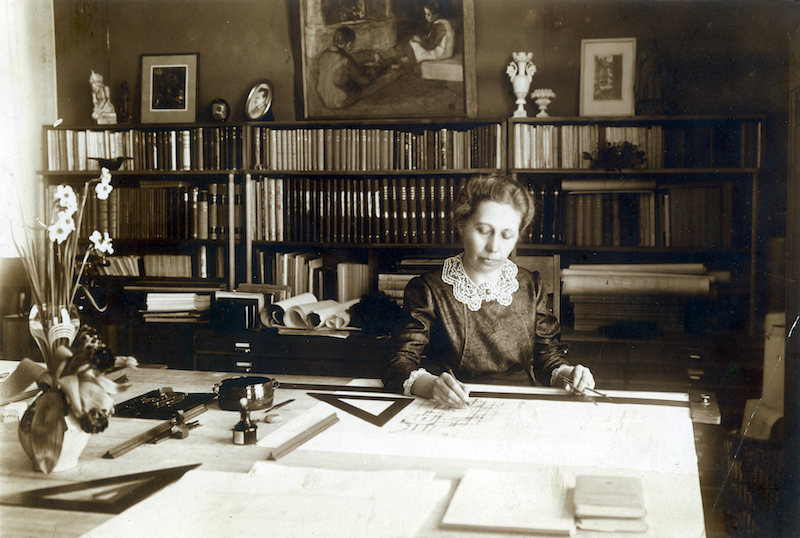 Wivi Lönn in the study of her home in Jyväskylä, 1915. © Museum of Central Finlan

Wivi Lönn was the first woman architect in Finland to run her own architectural firm. The Long Live Wivi Lönn! exhibition celebrates the career of the architect who broke glass ceilings and her significance for the generations of women architects who followed afterwards. Lönn’s architecture and life are set within a broader societal framework and a gender-responsive history of architecture.

The exhibition also features the Finnish Association of Women Architects Architecta, which was founded on the occasion of Lönn’s birthday in 1942 and whose activities continue still today. For eighty years, the world’s first association of women architects has provided its members with both professional support and a platform for writing the history of Finnish women architects. The extensive archival material documenting the work of women architects, created as a result of the association’s systematic recording activities, will be presented for the first time at the exhibition. Exhibition visitors are invited to a veritable banquet, to enjoy what the archive has to offer. The exhibition also includes excerpts of the development of feminist architectural thinking, from the 1970s to the present day.

The exhibition is co-curated by the Museum of Finnish Architecture staff Anna Autio (collections curator), Jutta Tynkkynen (exhibitions curator) and Marja Rautaharju (head of exhibition services), together with art historian and doctoral researcher Hanna Tyvelä. The exhibition was designed by designer Hanna Anonen.

“Wivi Lönn was a master at creating comfortable functionality in her buildings and using even scarce resources to her advantage. She closely followed development trends in architecture and her design was always contemporary. At the same time, she had her own recognizable style based on the precise identification of the users’ needs. During her lifetime, she received far less recognition than, for instance, Eliel Saarinen and Lars Sonck who belonged to the same generation, despite the fact that Lönn’s extensive production was not in any way qualitatively inferior to theirs. It feels good to now highlight the importance of Lönn’s exemplary career,” states Anna Autio.

“During the early days of Wivi Lönn’s career at the beginning of the 20th century, the social status of women was very different from what it is today. There were many obstructions and outright obstacles standing in the way of a woman in professional training. There were no other women architects in Finland during Lönn’s time who ran their own office and succeeded in architectural competitions. Why was that? Why weren’t there any other independent women architects in Finland? The exhibition tries to find answers also to these questions,” states Jutta Tynkkynen.

“The history of women architect communities refines our understanding of the work and life of architects. A large number of architects are mentioned by name in the exhibition, and who, as a diverse group, are in my opinion perhaps even the most important part of the totality. How true can an individual architectural narrative be? We need new ways of looking at things, which dismantle the person-centred myths of architecture,” states Hanna Tyvelä, who has researched the history of Architecta for the exhibition.

“The exhibition spans from Wivi Lönn to the present day and also broadens the perspective to encompass international discussions. Feminist architectural actors pay attention to the importance of gender and equality in the field of architecture. For example, the Muslim Women in Architecture collective, founded in London, highlights the perspectives of minority architects,” adds Marja Rautaharju.

The exhibition book being published in honour of the 150th anniversary of the birth of Wivi Lönn will be the first collection of articles focusing on her diverse work as an architect. The book consists of five expert articles that look at different aspects her production and career. Among other things, the book examines Lönn as a designer of housing and schools, discusses her travels, and analyses her production in relation to the prevailing society and networks that proved important to her. The book’s contributing authors are Finland’s leading experts on Wivi Lönn’s architecture: Renja Suominen-Kokkonen, Susanna Aaltonen, Hanna Tyvelä and Anna-Leena Lehto.

In honour of Wivi Lönn’s birthday, the Museum of Finnish Architecture is organizing a weekend-long festival on May 20–22, 2022, where participants will gather around the work of Wivi Lönn and her followers to reflect on the relationship between architecture and gender in a variety of artistic and scientific ways. Read more about the festival programme