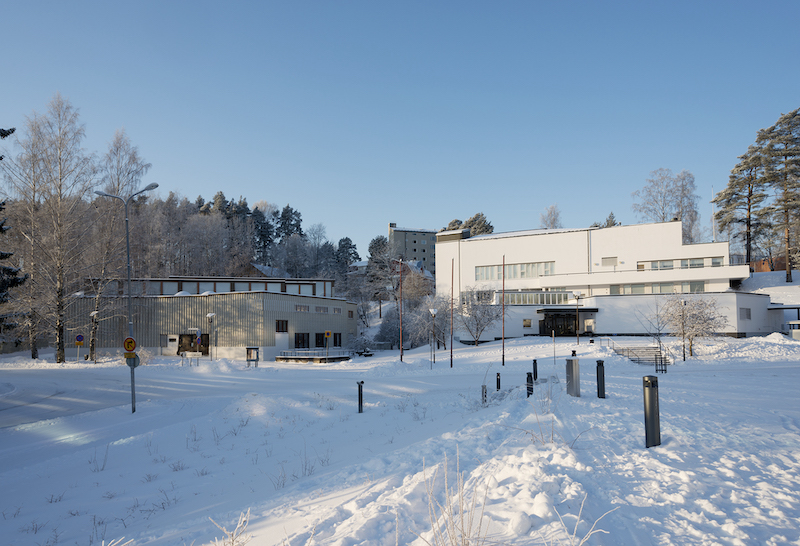 The name Aalto2 has been selected for the new museum hub currently being built up in the Ruusupuisto area of Jyväskylä, Finland. The name describes two adjacent museum buildings both designed by the architect Alvar Aalto: the Alvar Aalto Museum (1971–1973) and the Museum of Central Finland (1956–1961, 1991). With the buildings to be joined by a new connecting wing, the two separate museums will be housed under one roof.

"The new name is a story of two fabulous Alvar Aalto-designed museums which will make up one interesting whole in both their architecture and their content. Thus, 2023 will see the openings of an attractive museum hub, more than the sum of its parts. With this new name and insignia, we want to send a message about a unique, interesting museum hub for the future, offering visitors the chance for inspiring experiences and learning in a unique environment", says Heli-Maija Voutilainen, the Director of Museums for the City of Jyväskylä, who was part of the name selection committee.

A descriptive, easy to remember name for the museum hub, easily comprehensible in various languages was sought in the naming process. In the spring of 2021, the public was invited to suggest names for the future museum hub, and 1006 clever proposals were received by the deadline "The name we have now chosen, Aalto2, is a result of both public feedback and the deliberations of the management team", says Tommi Lindh, Managing Director of the Alvar Aalto Foundation. "Even though none of the names suggested by the public were selected in and of themselves, the number of proposals we received is an indication of the interest of the public and the several different approaches to museum centre", says Voutilainen.

The classy, minimalist visual style of the new museum hub is the work of Graphic Designer Ilkka Kärkkäinen.

The Alvar Aalto Museum is currently closed for renovations. The new connecting wing to join the two museums is constructed as part of the renovation process. The new museum hub is to open to the public in the summer of 2023. "In early 2020, the renovation of the Museum of Central Finland was successfully completed. The future connecting wing was taken into account in the design of that work. The new connecting wing makes it possible for the museums to cooperate more closely and in more ways than before, and offers new opportunities for events, museum shop, cafe, and restaurant services, and much more", says Lindh.

Both Heli-Maija Voutilainen and Tommi Lindh believe the museum hub will become a bustling meeting place for locals and international visitors as well. "Apart from that, the exhibition spaces on offer at Aalto2 will make up one of the most interesting venues available in Finland without a doubt", says Lindh. "We believe high-quality exhibitions and events and the ancillary services on offer at the museum hub will draw crowds looking for experiences and engaging content concerning both cultural history as well as current topics in architecture and design. At the same time, the museum hub should increase the visibility of both Jyväskylä and both of the museums as a destination," say Voutilainen and Lindh.