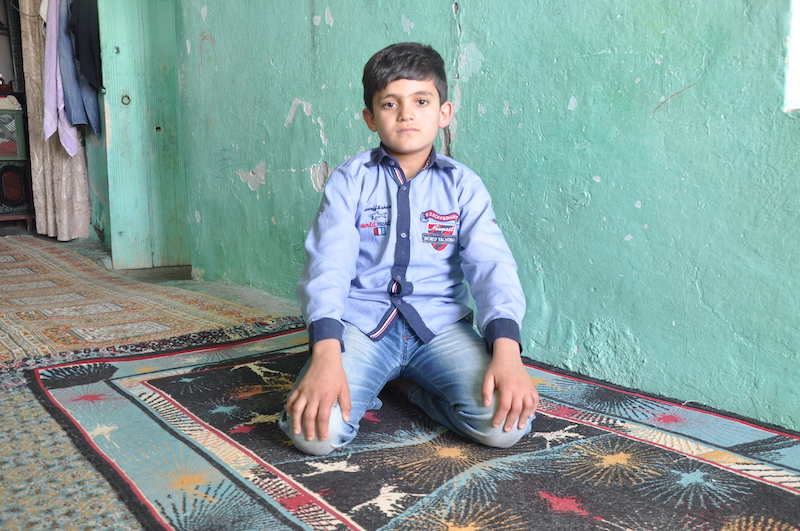 This year the Touch exhibition, which showcases works from the Saastamoinen Foundation Art Collection, presents a series of three media artworks. Wonderland (2016) by Erkan Özgen is the first of these works. The series is a part of the Listening to Silence section of the exhibition, opened in autumn 2021 as part of the Touch exhibition. The section explores different dimensions of the inner world of humans, such as past events, traumas, and how they are processed.

Wonderland is the touching, wordless story of the thirteen-year-old Muhammed, who fled the Syrian town of Kobanî with his family when the Islamic State (ISIS) forces attacked it in 2014. In the short video, Muhammed, who is deaf and unable to speak, conveys a firsthand account of these traumatic events by using only gestures and sounds. Wonderland will be displayed at EMMA's media space from 1 February to 1 May 2022.

Artist Erkan Özgen's (b. 1971, Mardin, Turkey) video and photography-based installations examine issues concerning migration, cultural identity, language, conscience and ethics, among others. The artist met and befriended Muhammed in Özgen's hometown Derik, in south-eastern Turkey, where Muhammed and his family had taken shelter after crossing the Turkish border. Unlike any of the other refugees Özgen had encountered, Muhammed was keen to communicate what he had witnessed.

According to Özgen, Muhammed represents the collective conscience and portrays a metaphor for all those who have lost their homes in a war. Muhammed is their rebellion, battle cry and most important message to the world. The story of Muhammed, who has witnessed extreme violence, helps us to look beyond the media's violent imagery headlines and into the reality of war and human suffering.

In his works, Özgen amplifies stories that run the risk of being forgotten amid the constant flow of information or are sometimes even intentionally overshadowed. His works have been exhibited in various solo and group exhibitions internationally, such as dOCUMENTA 13 exhibition in Kassel, Manifesta Revisited in Amsterdam and Turquie et Alors exhibition in Centre Pompidou, Paris.

After Wonderland, the media space of the Touch exhibition will feature Jeannette Ehlers' Black Bullets and Maija Blåfield's The Fantastic. The core theme of the Touch exhibition is humanity. This series of media artworks has gathered works from the Saastamoinen Foundation Art Collection that deal with the human impact of war on individuals, communities, and cultures, across eras and different parts of the world.