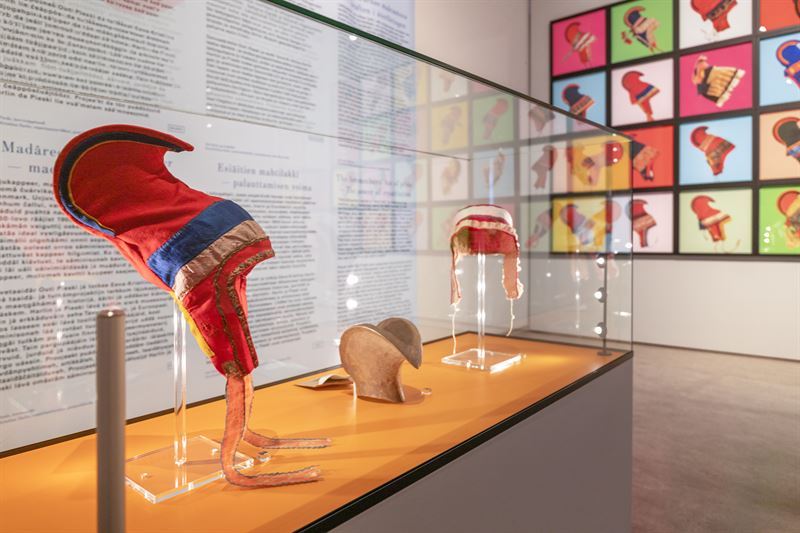 A piece by Outi Pieski, 47 Most Wanted Foremothers, shown in the background, contains images of ládjogahpir headgear from the collections of various European museums. The piece is part of an art and research project by Pieski and researcher Eeva-Kristiina Nylander, Máttaráhku ládjogahpir – Foremother´s Hat of Pride. Image: Omar El Mrabt, the Finnish Heritage Agency

Requests to have the National Museum’s Sámi collection returned had been made before, but the negotiations did not begin properly until the Sámi jubilee year of 2017 when Director General Elina Anttila from the National Museum of Finland and the then Director of the Finnish Heritage Agency, Juhani Kostet, took part in the celebration held in Trondheim as part of Bååstede, a similar repatriation project in Norway.

‘Repatriation is currently a hot topic in the museum sector around the world and challenges us to rethink the role of museums and the power that they wield. While the focus has shifted to cultural diversity, people’s and population groups’ ability to determine their own cultural heritage and decide on its use has become increasingly important. It was easy to engage in the discussions initiated by Sámi Museum Siida’s Museum Director, Sari Valkonen. This required an in-depth review of the Sámi collection of the National Museum of Finland and all aspects that needed to be considered if it were to be repatriated,’ says Director General Elina Anttila from the National Museum of Finland.

The Sámi collection consists of some two thousand artefacts and was assembled over a 170-year period beginning in the 1830s. A memorandum of understanding on the repatriation of the Sámi artefacts was signed in April 2017 at an event held at the National Museum of Finland in Helsinki.

‘The repatriation process has increased Sámi communities’ interest towards museum collections and made our work as the Sámi’s own museum more visible. Soon, we will see all the positive effects that this repatriation will bring,’ says Sámi Museum Siida’s Museum Director, Sari Valkonen.

On 26 August 2021, the National Museum of Finland received the Finnish Government’s approval to return approximately 2,200 objects from the Sámi collection to the Sámi Museum Siida. The artefacts were carried to Inari, Sápmi, to Sámi Museum Siida in September 2021.

’It brings our past closer to us Sámi and enables us to study and reconnect to our cultural heritage in our own terms. It is a symbolic gesture of recognising Sámi people’s right to manage their own cultural heritage’, Curator Anni Guttorm from the Sámi Museum Siida says.

‘During the process of putting together this exhibition, all parties have had the opportunity to learn from one another. Since becoming familiar with each other and learning to work together, the process has given us a lot. It has been a great pleasure to witness and be able to share the depth of the exhibition working group’s understanding of how the collection was created, how meaningful it is, and what the emotions and opportunities connected to the repatriation are,’ says Curator Anni Guttorm from the Sámi Museum Siida, one of the working group’s members.

In Mäccmõš, maccâm, máhccan – The Homecoming, works by Sámi crafters and pieces by contemporary artists interact with 140 artefacts selected for the exhibition. In addition to that, the exhibition includes numerous texts and stories by Sámi storytellers, stories told by artefacts and archive material, such as photographs and yoik singing. The exhibition texts are in 6 languages from which 3 of them are Sámi languages spoken in Finland.

The exhibition provokes thoughts about the value of objects, traditions and history. It illustrates the importance of controlling and having ownership of cultural heritage and does not shy away from critical examination of historical sore points.

‘We hope that the cooperation between the National Museum of Finland and the Sámi Museum Siida can show the way ahead around the world. Cultural heritage has a key role in dealing with a problematic history. At its best, repatriation is a process that allows us to take responsibility of our past mistakes in a constructive way,’ says Director General Elina Anttila from the National Museum of Finland.

The National Museum of Finland has worked actively to highlight the importance of the museum's collections not only in terms of the right to cultural heritage, but also as part of the sustainability of culture. In 2020, the museum repatriated the remains of Pueblo Indian ancestors with associated funerary objects from the 13th century to a coalition of Native American tribes. They were part of Mesa Verde collection created by the Swedish geologist Gustaf Nordenskiöld in the 1890s.

Source: The National Museum of Finland