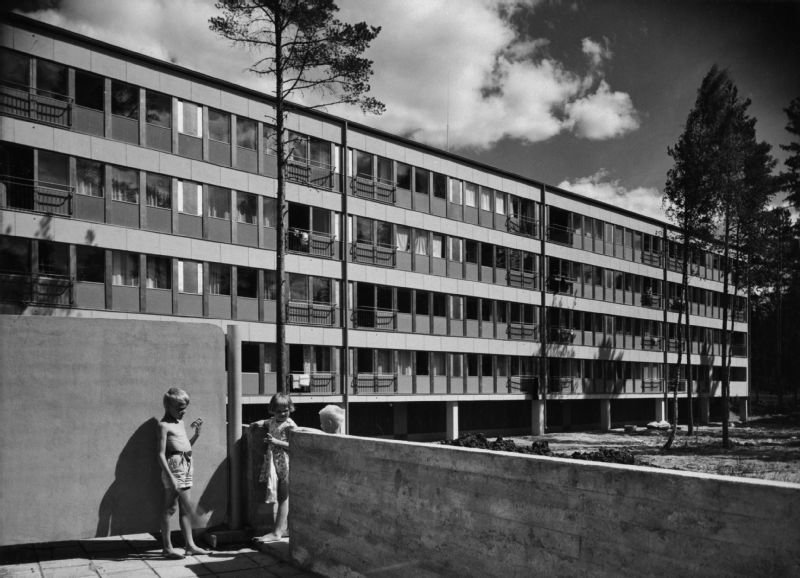 New Standards presents the history of a uniquely Finnish approach to mass-produced housing in the twentieth century. First displayed in the Pavilion of Finland at the Biennale Architettura 2021 in Venice, the exhibition will receive its first showing in Finland at the Museum of Finnish Architecture’s small exhibition hall on 21th of January – 10th of April 2022.

New Standards presents the story of Puutalo Oy (Timber Houses Ltd.), an industrial enterprise established in 1940 to address the Karelian refugee crisis, when some 420,000 people were displaced by war. At this moment, both architects and industrialists came together to create a new model of factory-built housing that modernised Finland’s construction industry. In less than a decade, the company became one of the largest manufacturers of prefabricated wooden buildings in the world. By the mid-1950s, millions of square meters of buildings had been shipped from Finland to more than 30 countries in exchange for goods and capital to support the struggling post-war economy. The story of Puutalo’s production and export during these two decades illustrates the ways in which architecture connected with political, industrial and economic forces during a period of intense global exchange and development.

The New Standards exhibition documents the history and development of these pre-fabricated buildings from 1940 to the mid-1950s. The houses were developed by some of Finland’s leading mid-century architects and their archetypal exterior appearance belies the innovation that went into their structural design, spatial arrangement and domestic utility. Archival drawings, photographs and advertisements illustrate the ambitions of this period, revealing new innovations and illustrating the modifications that buildings underwent for different climates and cultural contexts. Although the houses, schools, barracks and hospitals manufactured by Puutalo are not included in most standard histories of architecture, they may be Finland’s most widespread architectural export. The company and the buildings that it produced contributed significantly to the post-war rise in living standards across the world.

Originally commissioned and produced by Archinfo Finland for the Pavilion of Finland at the Biennale Architettura 2021 in Venice, the exhibition is conceived by a curatorial team of three academics linked by their work at Aalto University: Laura Berger, Philip Tidwell and Kristo Vesikansa. New photography of the Puutalo houses in Finland, Denmark and Colombia has been specially commissioned from acclaimed photographer Juuso Westerlund in order to show how these houses are inhabited today, and how they have been personalised over decades of use. After 80 years, Puutalo buildings have proven robust enough to withstand extensive use, updates and modifications in a wide variety of contexts and climates.

“The story of Puutalo Oy has remained largely unresearched, regardless that the same architects who are known for the national monuments, such as the Helsinki Olympic Stadium, spent years designing these modest wooden buildings. One reason might be that war-time has been often regarded as some kind of interim period, during which nothing much happened in the field of architecture. The history of this company has brought to surface that during the 1940s numerous innovations and important practises were created, the effect of which has lasted for decades. Today many of these innovations appear so mundane, that we take them for granted,” says curator Laura Berger.

“Having travelled to different countries to visit neighbourhoods where these houses still exist, we have been impressed with how proud the current owners are of their homes. The concept ´Finnish house´ is still known in many countries, referring to the compact wooden buildings of the 1940s and 1950s with a gabled roof. The simple construction system and materials have also allowed residents to modify and expand these structures according to their wishes – at times in the most surprising ways. This way, initially more or less similar houses have been converted into individual homes,” describes curator Kristo Vesikansa.

“Standardization in architecture often evokes ideas of uniformity and monotony, but the prefabricated buildings of Puutalo tell a more complicated story. The crisis of the war and of reconstruction reveal the ways in which architecture is involved in social, economic, political and material concerns. With the onset of climate change, those issues are as relevant today as they were in 1940.” says curator Philip Tidwell.