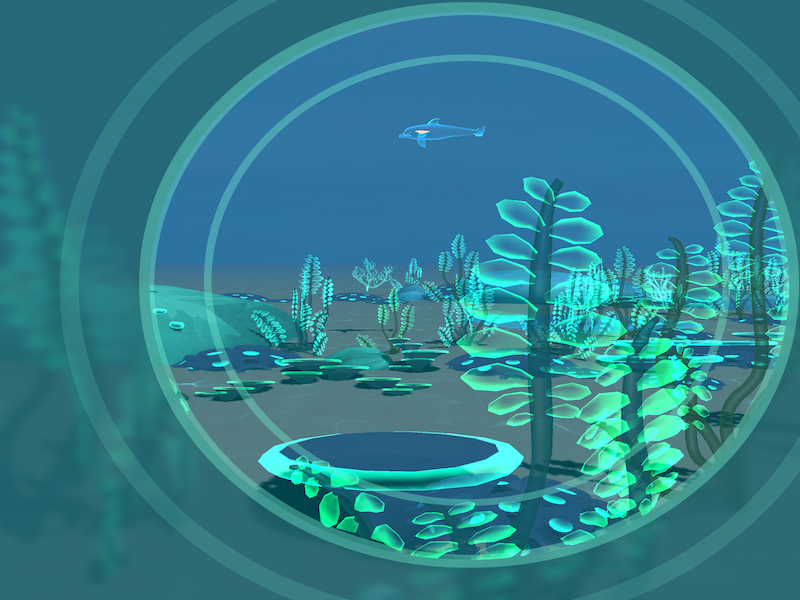 Leena Pukki´s and Karoliina Paappa's work 'In Someone Else's Skin. A Deep Dive – What Is It Like to Swim in the Middle of a Pod of Dolphins? (2021)

Ääreen is an art project that involves screening interactive, documentary animations throughout October and showcasing new Finnish and international animation art. The project features exhibitions, screenings, discussions and interviews, bringing together experts in different fields in an open-minded manner and creating multi-artistic experiences for a broad audience to take in.

From 4 to 31 October, the Cube venue of Oodi will feature Leena Pukki´s and Karoliina Paappa's 2021 work Toisen nahoissa. Syväluotaus – millaista on uida delfiiniparven keskellä? ('In Someone Else's Skin. A Deep Dive – What Is It Like to Swim in the Middle of a Pod of Dolphins?'). Supported by AVEK, the work is an interactive animation shown on two walls of the Cube venue. The animation is connected to a sonar soundscape that can also be physically felt in the room.

"The aim of the work is to translate the experiences of dolphins into a format understood by humans and provide an immersive art experience that increases empathy," said Leena Pukki and Karoliina Paappa.

Ääreen provides a programme every Thursday, both remotely and on-site at Helsinki Central Library Oodi. At the discussion events, the animation authors get the spotlight and shed some light on the background of their works. The masterclass event brings a piece of Denmark to Oodi as filmmaker and multimedia artist Uri Kranot from the ANIDOX Forum talks about the wide range and possibilities of animated documentaries.

In October, the large projection surfaces of the Oodi lobby will also be used to screen animations curated by the Finnish Animation Guild and experimental animations created by students of Aalto University. They are built on visuality and diversity. Children and young people are provided with animation-themed workshops.

On International Animation Day on 28 October, animations will take over Oodi. The programme will be kicked off with a panel discussion with the Finnish Documentary Guild that focuses on the interactive relationship between animation and documentaries.

Speeches will be given by authors such as Leena Kilpeläinen, whose film about Maija Isola will premiere this autumn. Kino Regina will screen both short and long animation films throughout the evening. The production is a collaboration with the National Audiovisual Institute KAVI and the Turku Animated Film Festival.

Animations created by Aalto University's Master's Programme in Animation students and minor students can be seen at special screenings on 28–31 October on the second floor of Oodi.