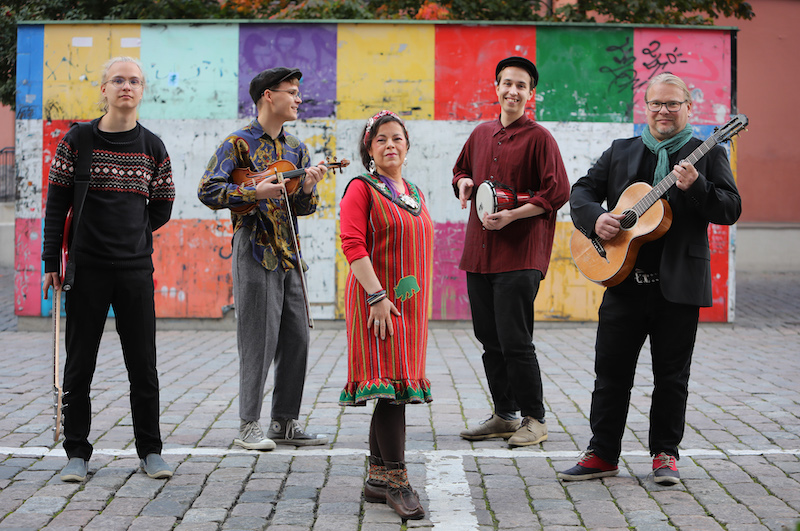 Cultural Centre Caisa is turning 25. To celebrate the anniversary, Caisa will donate art to Helsinki residents as a birthday gift. The gift package includes art workshops for children, teens, and adults of all ages; samba and a concert with modern Sami music; previews of community dance sculpture Bacteria by artist group Compañía Kaari & Roni Martin; and online performances. The art gifts will be shared with the public in August–November 2021.

"Instead of holding a traditional celebration, we wanted to honour Caisa's 25th anniversary by donating art experiences to Helsinki residents. Especially now, during the pandemic, enjoying art and culture in traditional ways has been difficult, and Helsinki residents have longed for more art in their lives. These art gifts will complement Caisa's autumn programme, which will be held in our cultural centre starting in August. Caisa's duty is to promote the City's diversity in all its forms, and both the autumn programme and the art gifts will support this mission," says Caisa's director, Cátia Suomalainen Pedrosa.

Art workshops will be held for people of different ages in August. On Saturday 14 August, at 10:00–12:30 and 13:00–15:30, Pete Hende Nieminen will lend his expertise to a children's graffiti workshop in Caisa's courtyard (Kaikukatu 4B).The graffiti art pieces by children will be exhibited for a month on the fence between Haapaniemi football field and Hämeentie, starting from late August. The event will also offer family exercise organised by Sports Services, such as an obstacle course for small children, throwing target practice and instructed kettle ball exercises for adults.

20 August at 10–14.30 in Caisa's courtyard, young graffiti and street artists Fabu Pires and Pyry Leskinen will be painting together for the first time, taking on a 3 x 6 metre mural to celebrate Cultural Centre Caisa's 25th anniversary. Helsinki residents are welcome to come along to celebrate and enjoy the atmosphere. The piece will be on display for a month in the courtyard of Leipätehdas.

Lanterns made by City residents and artists will be used to create an environmental community art piece that will bring light to the darkness of autumn. A total of 250 lanterns will be given to City residents to make them their own, and artists from Kallio will create further 25, larger lanterns. Helsinki and Kallio residents can take part in Caisa's lantern workshops, which will be held with different partners all around Kallio in week 33 (16–21 August).The lanterns created in this workshop will be exhibited in Caisa's courtyard, shop windows and the trees along Hämeentie. The light chain built with these lanterns will light up the darkening autumn evenings 18–25 September 2021.

Art gifts can also be enjoyed by dancing samba on Haapaniemi field on 14 August, starting at 15:45. The Helsinki-based percussion group Samba Sinestesia bases its music on Brazilian samba, but seeks inspiration from all around the world, crossing borders while respecting traditions. Helsinki residents are welcome to join them in this re-energising musical journey of enjoying movement.

The music performance in Caisa's art gift package is a concert by Ulla Pirttijärvi & Ulda ensemble, Gávcci jagiáiggi – Eight seasons. The performance will be held on 17 August at 17:00 on the Musiikkitalo terrace. This modern Sami music concert presents musical dialogue between traditional Sami culture and the modern world. The acoustic instrumental accompaniment leaves space for the rich, magical palette of yoik's tones of sound, supporting its own soundscape. The band have released two albums, 'Ulda' in 2021 and 'Roijk' in 2018, and have performed in Finland and Nordic countries, as well as in the USA, Germany, France and Russia, amongst others, since 2009.

Caisa will donate to Helsinki residents a preview of the multi-artistic community art piece Bakteeri – Bacteria – by artist group Compañía Kaari & Roni Martin. These previews of the Bacteria performance will be presented all around the inner city, offered by Caisa, on Thursday 26 August and Friday 27 August.

The multi-artistic, community art piece Bacteria is a living dance sculpture spreading around the city, where the artistic content is as diverse as the work's group of creators. In the hands of the artists participating in the performance, the bacterium can adopt any form and represent any social phenomenon or issue. In its entirety, Bacteria will be presented in Helsinki 20–26 September 2021. More details about the young artists and the work:

Two online events will also be published during the autumn. Gabriela Ariana Collective's Syntyihin syvihin is a dance performance recorded in the woods of Nuuksio, focusing on connection to nature and experiences of foreignness. Vera Lapitskaya's performance Seeds on the rock consists of the texts and sounds for an invisible dance performance.