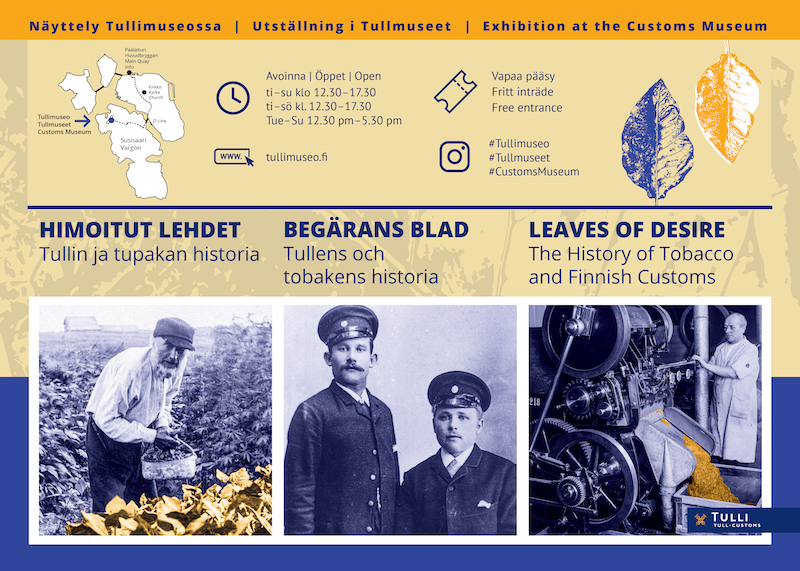 The Customs Museum will open to public again on 1 June 2021 in Susisaari, Suomenlinna. The new exhibition 'Leaves of Desire - The History of Tobacco and Finnish Customs' focuses on the more than 400 years of shared history of Finnish Customs and tobacco products. Throughout the years, the Finnish society's approach to tobacco has varied significantly. This variation has also been evident in the work of Finnish Customs.

Imported to Europe from the Americas, tobacco was initially an expensive luxury product and it was deemed that its import into Finland should be restricted. However, the government soon realised that tobacco could be made into a significant source of tax income for the state. To that end, the production and cultivation of tobacco in Finland was purposefully increased in the 18th century. An industry for the processing of raw tobacco was formed, and it was supported by the state in a variety of ways.

In the 19th century, the tobacco industry was a significant source of income in Finland as well. Production increased in the 20th century, but later the European integration and changes in consumer habits led to a decrease in the production of tobacco products. The last Finnish factories were closed in the early 2000s. After that, all ready-made tobacco products have been imported and the import of raw tobacco has stopped completely.

In addition to customs duties, tobacco has been subject to other fees as well, such as consumption and excise taxes. Finnish Customs was often tasked with the collection and supervision of these taxes.

Since the 17th century, tobacco has been smuggled due to a high demand and a will to avoid paying taxes. A particularly large increase in smuggling was seen in the late 1990s and early 2000s - around the same time, the number of Finns who smoked started to decrease. The reason for this was the changes implemented at Finnish borders and the liberalisation of transport. Lately, smuggling snus has been more popular.

Attitudes toward tobacco changed in the late 20th century, when people became more aware of the significant health risks of tobacco. In the 1970s, the health risks became the primary grounds for tobacco's taxation.

The exhibition recounts the history of tobacco from the 17th century to current day. It showcases old smuggling methods and describes tobacco's status in Finnish culture at different times. On display are also unique objects borrowed from other museums.

Welcome - the exhibition is open until September in Suomenlinna

In addition to this thematic exhibition, the museum provides information on the general history of Finnish Customs. The Customs Museum is located in the Halmilton - Polhem Curtain in Suomenlinna, at the address Suomenlinna B 20 D, Helsinki The exhibition is open until September. Free admission. Due to the coronavirus situation, we will restrict the number of museum visitors if needed, and visitors must wear a facemask.