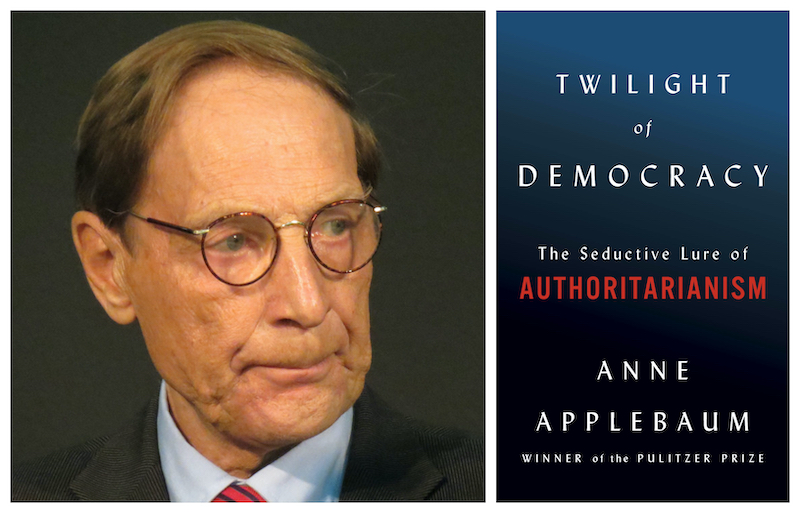 THE AMERICAN JOURNALIST Anne Applebaum is a well-known author and authority on issues related to eastern Europe. The titles of her previous books often contain words such as gulag, iron curtain, and Holodomor, Stalin’s starvation of Ukraine. She has always been very open with her own ideological convictions. She is an old-school conservative, anti-communist, and moderate republican from the era before Trump.

Her latest work, Twilight of Democracy, is one of many books calling into question the future of democracy, with a focus on the unfortunate authoritarianism her own conservative beliefs tends to be associated with. Her other home country is Poland, where she often spends time with her husband Radoslaw Sikorski, foreign minister in Poland between 2012 – 2016.

Applebaum structures her worries by first writing about how a party she held in her polish home during 1999 stands in stark contrast to the polarization she now sees in the world. The group of intellectuals that gathered at that party, at the time believed in a liberal and open European community. Now, 20 years later, perhaps half of them have adopted an almost reactionary ideology, and completely stopped talking to her.

She wants to talk about how that might have happened. Nativism, nostalgia, careerism, but most of all, the use of conspiracy theories, have brought far-right reactionary parties to the forefront of Polish and Hungarian politics. The tragic air crash in Smolensk first united Poland, but the party “Law and justice” reinterpreted the accident as a conspiracy that motivated political and judiciary purges against the opposition.

Applebaum uses anecdotes and profiles of persons to describe a similar process happening in Hungary. In an interesting analysis she shows how conservative parties in Spain, Great Britain, and Italy, both old and new, have drifted towards a more right-wing populist ideology. Inevitably, this leads her to Donald Trump, and how his style of politics has inspired the neo-conservative strategies being applied in Europe – and vice versa.

Her book has now been published in Finnish and Swedish and gotten first-hand reviews in prominent media across many countries. After reading the English original, I asked myself whether Applebaum offers anything new to use in the defense of democracy. Besides using her own extensive set of contacts across prominent conservative cliques in London (Boris Johnson), Washington and New York, she offers depressing, but rather well-known facts.

In one concluding statement of her book, she says the following: “It’s possible that we are already living through the twilight of democracy; that our civilization may already be heading for anarchy or tyranny, as the ancient philosophers and America´s  founders feared; that a new generation of clercs, the advocates of illiberal or authoritarian ideas, will come to power in the twenty-first century, just as they did in the twentieth; that their visions of the world, born of resentment, anger, or deep, messianic dreams, could triumph.”

It is easy to agree. But what is her antidote, what is her cure? Sadly, she ends by citing older, fatalistic, and relativistic thinkers: Political regimes come and go, bad habits remain; there are no miracle cures. Persuading people to divert from the winding road of democracy with its many twists and turns, has always been an authoritarian trend that is hard to get rid of.

Despite this, her book can be useful if it is read as a warning to those who will be at the frontline in the coming years: The leaders of the traditional conservative parties in the western world. After WW2, these parties have normally valued a liberal view on democracy, a society built on law and order, separation of powers and protection of minorities. It is these parties whose views are being challenged from the right. They are being harassed by the populists to focus more on strong leadership, nationalistic self-assertion, and opposition to liberal social values.

Applebaum herself brings a trustworthy conservative voice to the issue, and she deserves to be heard when these parties are choosing sides. We have seen several Nordic conservative parties facing that choice, and an ideological polarization is developing even in our coalition party (Kokoomus). This appears in the form of a far-right flank, sympathetic to cooperation with The Finns party, and in the form of those who swear fealty to the foundational values of liberal democracy. The latter are being led by Matias Marttinen and his manifesto (10 teesiä modernille oikeistolle, 10 Thesis for a Modern Right) that can be found (in Finnish) on the website of the think-tank Toivo.

Pär Stenbäck is a former Finnish politician who has been a MP, Minister of Education and of Foreign Affairs in the years before 1985. For a period of twenty years he held leading positions in the Red Cross movement, among these as Secretary General of the International Federation of Red Cross and Red Crescent Societies (Geneva). He is a founding member of ICG and the European Cultural Parliament ECP. He received the honorary title as Minister in 1999. Today he is chairing the New Foreign Policy Society in Finland (NUPS) since 2017. He contributes regularly to news media.