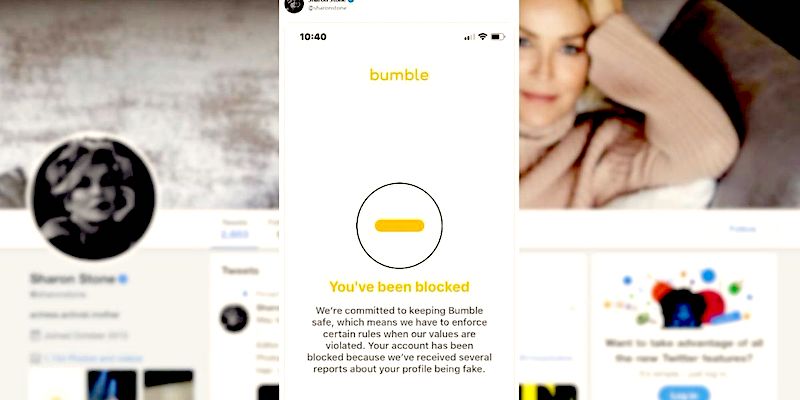 2020 KICKED OFF WITH A BANG in the world of showbiz news, when it was revealed that Hollywood star and Academy Award nominee Sharon Stone had her account blocked by the popular online dating app Bumble, due to concerns that her profile was fake.

However, it turns out that the 61-year-old superstar truly had set up a Bumble account in the hopes of finding love. Shortly after some fans on Twitter had excitedly posted screenshots of her profile online, Stone herself responded by tweeting that Bumble had deleted her account.

In the viral tweet, Stone tagged the official Bumble Twitter account, accusing them of being “exclusionary” and pleading “don’t shut me out of the Hive”. Stone also mentioned that several users of the dating site had reported her account, as they believed that it “couldn’t possibly” be genuine.

Many expressed surprised that Stone was using the app, given her reputation as a global sex symbol. The actress was catapulted to superstardom following her iconic role as a seductive sociopath in the 1992 erotic thriller Basic Instinct, a role that would go on to cement the public image of Stone as one of the world’s most desirable women. The movie went on to become a classic, to the extent that it was even the topic of games portrayed on some Finnish betting sites. Stone has gone on to land award-winning roles in hit Hollywood films such as Casino, Catwoman and The Disaster Artist.

After the incident began generating headlines around the world, the management team at Bumble were quick to respond. Clare O’Connor, the managing editor at Bumble, issued a public statement apologizing for the incident, saying that they had restored Stone’s account and that “this won’t happen again”.

Stone’s struggles with the world of online dating are in part reflective of tough measures being taken by popular dating platforms too weed out fake profiles. Regulatory bodies have taken a strict line with the apps, with Tinder recently being sued by the U.S. Federal Trade Commission for sending people messages from fake accounts in an attempt to persuade them to purchase subscriptions. Data has shown that more than 500,000 purchased dating app subscriptions after being targeted by a fake profile in 2019.

Despite her profile, Stone has spent much of the past couple of decades single. She divorced from her second husband Phil Bronstein, editor of the San Francisco Chronicle, in 2004, citing “irreconcilable differences”. She briefly dated Angelo Boffa, an Italian real estate agent in 2018, but split with him later that year.

Upon re-entering single life, Stone said that “I think somewhere in the back of your mind you think maybe one day you won’t be a single parent, then, eventually you realise: I think it’s better. I’m no longer hoping for someone.” She now lives with her three sons in West Hollywood.

After it was confirmed that Stone was once again active on Bumble, she began to be inundated with messages from starstruck hopefuls looking for a shot of love with the woman named one of the “sexiest stars of the 20th century” by Playboy. Whether any of them will have any luck remains to be seen.