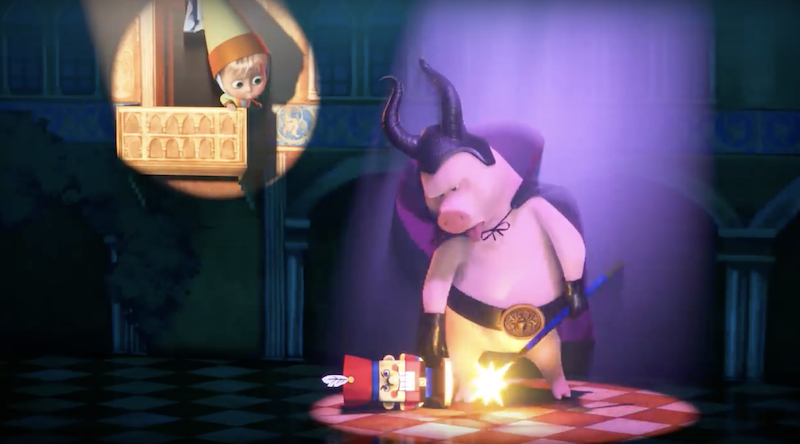 Screenshot from a Masha i Medved video

The fifth-most watched YouTube video in the world of all time is an episode of a Russian cartoon for little children. The formidable title of being the "most viewed non-music video" belongs to it as well. Titled "Recipe for Disaster", the 17th instalment in the Russian cartoon series "Masha and the Bear" (Masha i Medved) has, as of 2019, garnered 4.213 billion views. Although primarily intended at very young audiences, the delightful, vivid and intricate 3D animation, sprightly music and acoustics, gripping, fast-paced narrative, and a witty, fastidious, and acute English translation render it attractive to any age-group.

It broadcasts in more than 120 countries. Its YouTube channel is in the top 10 most-viewed worldwide, and its production studio Animaccord has registered a consistent and steady 40% annual revenue rise.

YouTube is an open to public channel where anyone can share videos for free and viewers can watch with no registration. The service is financed by advertisement. A new premium service lets users watch more content without adverts for a monthly payment.

The cartoon loosely-based on, rather inspired by an old Russian oral folk tale of the same name features a hyperenergetic, curious, and fickle but occasionally obsessive little girl called Masha and a retired circus bear who is paternalistic and protective towards her. The mischievous girl's antics keep brewing troubles of unexpected scales. Both of them dwell in the Siberian woods, supported by a host of side-characters, mostly various animals, co-denizens of the forest.

The animation is revolutionary, to say the least - so detailed that minor physical nuances as umbra and penumbra, the inertia of elastic motion, depression of surfaces from load-bearing, and so on are accurately reproduced as in real life. Even conventionally troublesome textures as hair and bothersome elements as finger detail during motion are seamlessly captured.  The frugally-ingenious sound effects, and the lighting and shadow effects are marvellous. As a result, they manage to produce 2-4 seconds of actual screentime daily, meticulously working on every little detail and elaboration. The producer, like many other creative professionals, moved to Los Angeles during the crisis-ridden latter days of Soviet-era before returning during the Putin-years. He still divides his time between Moscow and California, where many essential parts of the series are done.

Ukraine has accused that the (private-studio-produced) cartoon is a pernicious but effective Soviet propaganda - a subtle, subliminal tool - an insidious reminder and glorifier of the Soviet legacy. Influential Estonian academics strongly suspect sugarcoated brainwashing of children and signification of State Soft Power. The powerful, magnanimous and paternalistic bear is said to allude to the patronising, possessive and controlling Soviet State which is allegedly shown to protect the unruly, unwitting, clumsy, immature and indiscretionary individual citizen (Masha) from the troubles the latter inadvertently creates for itself. To the suspicious, incriminating eye, the parallels can be extended way more. The retired circus bear has a load of trophies, his most cherished possession, gracing his shelves - perhaps an allusion to the Soviet custom of preferring honorary, token and symbolic awards as medallions, badges and shields over monetary encouragements and incentives. The "retired" status of the bear resigned to a quiet life in the woods can be viewed as an allusion to the disintegration of the Soviet Union - an ambitious circus, to yield the relatively quaint and quiet, self-centred, less-occupied, more eudaimonic Russia of today. The apparent similarities don't seem to end here. A Chinese little-panda cousin to the bear, the habit of the protagonists to share everything with all the forest's inhabitants and their penchant for doing everything on a grand scale might raise a few cynical eyebrows too. However, is it poetic acknowledgement, honest admission, or a Freudian slip that most of their grand schemes inevitably end up being wasteful and failing? Albeit preserving a characteristically Russian flavour, the series has a distinctly modern tinge to it, occasionally featuring various international motifs and items as it progresses, weakening the accusation. The individual character development and diversification and episodewise-shifting focus also serve to defeat the claim. Then there is its knack for having numerous references and allusions to various Western cultures in select episodes. This mound of counterevidences, however, hasn't deterred the mainstream Western tabloid media from dishing out the decades-old long-wornout staple Russophobic paranoia, which senses a surreptitious communist mind-capture in the most innocent-seeming of things. A farrago of distortions, fearmongering tactics, and baseless speculation has ensued, raising alarm solely based on its Russian identity. This rat-smelling testifies the persistence of Red Scare tactics, three decades into the wake of the USSR's disintegration.

In July 2017 Council of Public Security activists from Odessa demanded that the series' telecast in Ukraine be banned. It labelled the series “a Russian media propaganda product” and stated that “Russian propagandists send a clear message to children: the bear, which is traditionally considered to be a symbol of Russia and is associated with this country, appears as a big strong hero who seizes someone else’s property, house, land with impunity ". In their zealous analogical tour-de-force, the Ukrainians seemed to forget that the basic plot point was the little girl invading the bear's home time and again, and not vice-versa.

Estonians sought to decode a cryptic, hidden agenda - branding it a part of the hybrid war. “My own experience suggests, that we are talking about manipulation, propaganda, and brainwashing. Just, everything is presented beautifully ” the University of Tallinn Professor Priit Hõbemyagi explained. “A bear symbolizes Russia; it’s a fact”. He adds that 'the cartoon demonstrates military actions, or rather the use of “soft power” by Russian troops', and 'is convinced, that the cartoon was created for the sole purpose: to convey to the world a message, where the cruel image of Russia (the Bear) is replaced by a soft and kind one.' He links it to Russian frontier expansionism and deems it a threat to Estonia's security!

Clad in the traditional Russian rural headgear, typical of humble matrons, the Babushka scarf, which gives her a distinct resemblance to Red Riding Hood, notwithstanding the similarity in their attitudes and the woodland-settings of their respective tales. Masha's full-sleeved double-layered foot-length garb, a measure against the woodland cold has taken on a totally unintended perception that has vastly contributed to its immense viewership - Islamic-prescribed attire conformance. The consequence of her dressing being misinterpreted, is sizeable viewership in South-East Asia. According to the Associated Press, "Masha, who is dressed in a folk (full-coverage) costume with a headscarf, became a household name in many Muslim nations including Indonesia." According to the fine print on the letters visible in one of the episodes, Masha and the Bear's setting is in Tyumen Oblast (the Pincode is 625537) near the primarily Tatar-populated Chikcha village. It is possible that she's a Tatar muslim who for some reason has the non-Tatar name Masha.

As for Russia itself, the upbeat music, the diversity of moods and characters explored, the vivid colours, playful antics, and the mere virtue of it being a modern, private studio-made cartoon for toddlers is a novelty. A cartoon that doesn't preach or imbibe cultural norms - one that is simply entertaining, is a departure from the discreetly-planned, targetted, ethical platitude-laden Soviet animation (not to disacknowledge their powerful anti-inequality messages). It is another in a series of successful reapings of international market voids, that have resulted from Putin's newfound encouragement of free, creative venture built for the international market. Here, the lack of an original free-to-watch, hyperrealistically-animated, multilingual-dubbed children's series online served as the opportune void to capitalise upon. No more is animation strictly state-sanctioned and department-administered, confined in its lacklustre outlook and limited in the scope of its coverage; But the one actually confined in archetypes seems to be the sensationalist and paranoid Western Press. It is noteworthy that the freedom of Soviet animation is a widely-contended issue, some arguing that it was surprisingly free, escaping the consideration of officials who deemed it too trivial and insignificant a thing to censor. Putin has long sought to distance the state from its dry legacy (while tantalisingly retaining the glory and nostalgia in convenient, selected bits) and to build a novel, 'normal' image of Russia. He can often be seen talking of cartoons during his frequent interactions with children.

China is known for blacklisting over two score popular anime series, besides a whole host of cartoons throughout its history, most notoriously Winnie The Pooh (allegedly on grounds of mockery of the Premier through Internet memes) and Peppa Pig ("for promoting gangster attitudes"). However, Masha and the Bear has successfully (and legally) infiltrated the Chinese market.

The production's outreach and ready assimilation in TV schedules of distant lands highlight the fact that the series is built to cater to an international audience and has made Russia seem more accessible than ever. It is quite possible that Western animation-studios and productions feel insecure due to its stupendous growth rate, and may lobby against the series. However, in Eurasia, the show illustrates the complicated and controversial nature of Soviet legacy and the myriad paradoxes that have prevailed in the region since its disintegration. All in all, something this popular, but just as innocent and unassuming, depicts the myriad ways cultural psyches manifest in different sociopolitical niches.

Masha and the Bear has shown the world how the warmth of companionship, joy and spirit can pervade the distant reaches of the frigid, Siberian woods, and that universal appeal and popularity can be found in the most unexpected of settings. It has truly elucidated the plurality of Eurasian viewpoints.

Pitamber Kaushik
Bangalore, India
The author is a journalist, columnist, and writer.