Print
Where to go 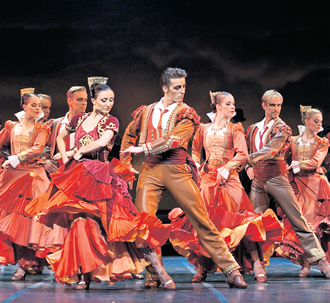 The spring season at the Finnish National Ballet starts with the major classical ballet, Don Quixote choreographed by the French ballet master Patrice Bart. Bart´s take on this ballet classic was first staged at the Berliner Staatsoper in 1993. The score for the ballet is composed by Ludvig Minkus in 1869. Brilliant visuals and virtuosic staging make Don Quixote one of alltime ballet favourites at the Finnish National Ballet.

Based mostly on two chapters of the epic novel by Miguel de Cervantes, Don Quixote takes the audiences on a journey from wintry Finland to sunny Spain. In the ballet, the romantic old knight Don Quixote and his comedic sword bearer Sancho Panza arrive at a Spanish village just as chivalrous aid is needed. The lovely Kitri is being married off to a rich nobleman Gamache, even though she is in love with the impoverished Basilio, and Don Quixote determines to rescue the young lovers. An absorbing adventure full of love and friendship begins.