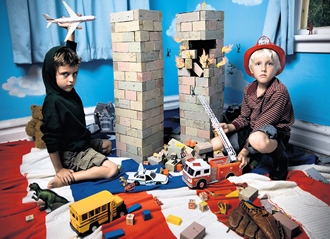 Two block towers; a toy plane; two pairs of eyes gazing straight into yours. A gaze which is impossible to avoid, a connection holding you – and the rest of society – to account. Though the scene appears to have caught two children innocently at play, the scene is striking when you realise they are playing a game of 9/11.

Jonathan Hobin is a Canadian photographer who uses the concept of play, a way for children to process the world around them, to challenge his audience to reconsider the vulnerable concept of childhood. What he shows us is a dark reality. His photographs show children at play – playing games of torture, murder, among other tragedies that we might otherwise consider belonging only to the adult world.

Are children not as innocent as we presume? How much do they know about the world? Are children simply props to us? Have we constructed an innocence which doesn’t exist? Hobin’s controversial art will have you reconsidering important questions about childhood and society’s take on children – in a playful manner.