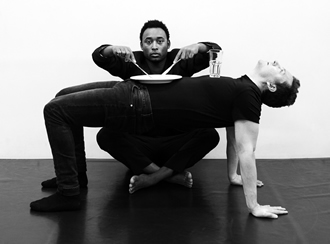 What is nothing? How does one show invisible thoughts? This autumn, Joona Halonen brings a new treat to the table: a 30 minute production titled Zero, Zero. The performance is on offer at Zodiak, Helsinki’s Center for New Dance, Finland’s most significant production house of contemporary dance.

Halonen’s last piece, Straight, was widely admired in spring 2013. His works are imaginative explorations of humanity and the environment. The upcoming production features a riot shield and the two male dancers, Guillermo Sarduy and Pasi Seppä. Tuuli Kyttälä is in charge of the music, and has won an award for her success in Straight.

Feet tread slowly on newspaper, and suddenly someone jumps on to the sea of weekly popular interests which abruptly ends the scene: the teaser won’t tell you much but it will certainly intrigue you! You’ll have to pay a visit to the cable factory to find out what Zero, Zero is all about.