Ed Sheeran's “Divide” world tour has been highly successful and has attracted millions of fans. The tour which started last March in Tourin, Italy and is planned to end in August in Ipswich, England is currently the second highest grossing concert of all times with a box office sales of over $678 millions for 236 shows.

Sixty thousand tickets to the Helsinki Concert were sold out in 30 minutes, the fastest ever in the Finnish history.

A second concert was arranged with another sixty thousand tickets, which also almost sold out. The artist is breaking records all around the world  and here in Finland. The combined number of attendants for the two concerts in Helsinki was more than any other in Finnland’s history.

To accommodate all these fans, the concerts in Helsinki were arranged in the Malmi Airport, which was being used as an event venue for the very first time. To organise the two day event on the 23rd and 24th of July, in addition to 40 trucks carrying Sheeran's own equipment, hundreds of truckloads of other production necessities were unloaded at the venue, including 700 temporary toilets and 450 meters of food and drink outlet counters. The city arranged special public transport services for the event and parking space for 3000 cars were arranged. 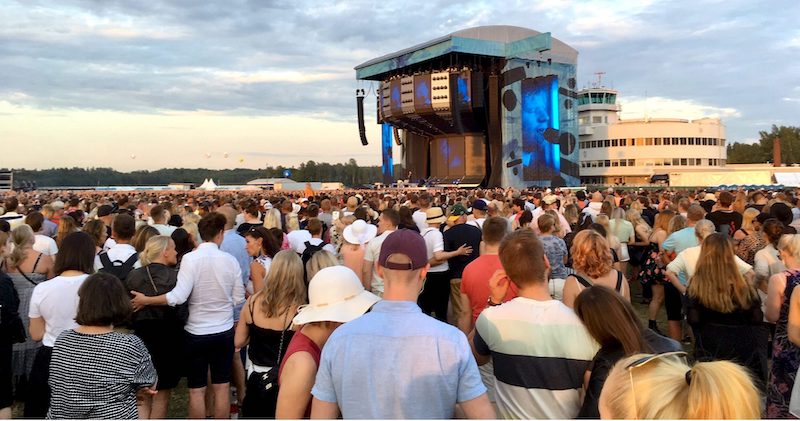 The “one-man show” performance itself was good and sincere and fans seemed happy with what they got, even though months ago announced warm up by Zara Larsson was cancelled due to the artist's illness. This was announced to the audience 15 minutes after her performance was supposed to start. James Bay had to perform a bit longer and Sheeran started earlier than scheduled. Despite Larsson’s cancellation, the twin concerts could be considered great success by all measures except one: Hundreds of fans who couldn’t make it lost their ticket money to Sheeran.

Many world class artists have been frustrated with their concert tickets being sold at the black market for much higher prices. In addition to the artist losing the money to scalpers, black markets prevent fans with limited budget to attend the concerts.

To prevent this, artists and organisers have tried different remedies to prevent scalpers coming between them and fans and benefiting at the expense of both the artist and the fans. There is huge money to be made through scalping and some professional scalpers use sophisticated computer programs and methods to go around ticket limits and get tickets as they come out.

NPR’s Planet Money podcast produced an excellent program on this topic. Kid Rock, interviewed in the program has tried the oversupplying method, i.e. arranging more shows where there is demand. Additionally he has been adjusting the price to the market, introduced premium pricing and paperless ticketing. He also raffles the first two rows to fans who bought the cheapest tickets.

Taylor Swift, to prevent money going to scalpers, just raised her ticket prices so high, that some of the shows didn’t sell out. She also had fans register beforehand on her website and then the names were ran through an algorithm to filter out scalpers.

To prevent scalpers from hiking up prices, Ed Sheeran has also put some measures in place for his world tour, including the concerts in Helsinki. Tickets were named and there was a limit of 4 tickets per person. The names on the tickets could not be changed and ID’s were checked at the entrance and matched with the names on the tickets.

This is all ok except for one thing:

Tickets were put on sale months ago at the end of 2018. Lots of honest fans who bought the tickets then, had changes to their lives and plans and were not able to go to the concert. Each ticket costed almost 100€, so for a young fan who bought four tickets, that's a considerable amount of money. The fans could not sell or even give their tickets to anyone else, because the names wouldn't match. Here is the part where Sheeran and organisers are complicit in honest fans losing money: the tickets also could not be returned and fans had no way to get their money back.

“This is totally unfair,” says Veera, a young student who bought four tickets for herself and friends, but couldn’t attend for personal reasons. “Ed, remember when you were a street musician, how valuable 100€ was for you”, she said.

Unfortunate ticket-holders who couldn’t make it were looking for people with the same surname to sell their tickets to - below the price they bought them - but some online buy and sell sites, like tori.fi took down ticket sales ads, so did Facebook market place, both citing organiser's restrictions. Organisers on the other hand said these were Sheeran’s wishes.

“Sheeran is already earning hundreds of millions from his tour”, Says Jari, who was drafted in the army this summer and couldn’t use the two tickets he bought for himself and his girlfriend as his surname was on them, “so a few fans getting their money back should not be a problem”.

Fans who had bought their tickets with honest intentions and their plans changed should have the right to get their money back or give or sell their tickets to someone else. Nobody benefits from paid empty “seats” in the concert, except, of course for Ed Sheeran.

It would be easy for the organisers to filter out scalpers when returning the money for unused tickets. Arranging a second concert was by itself a sufficient and effective measure for preventing professional resellers from benefiting and hiking up prices in Finland.

Unhappy fans who missed the concert and also lost their money have started a group in an attempt to get a refund form the organisers.