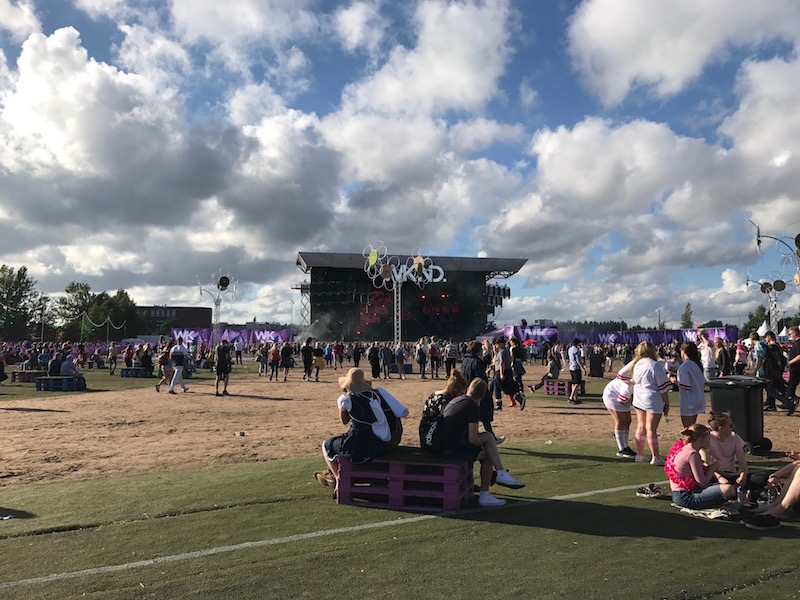 Weekend festival is a music festival witch is held every year in Finland, Sweden and Estonia. The music genre is mainly EDM and dance music but other genres for example pop, rap and R&B are also presented.

The artists performing there were mainly from the US, the UK and Finland, such as The chainsmokers, Marshmello, Rae Shemmurd, Alan Walker, Mikael Gabriel and Teflon Brothers, to name a few.

The festival area had five stages: Loop Stage, WKND Stage, Future Stage, The Dome K18 and Digital Stage. The Loop Stage was the biggest stage and was right in front of the entrance. The other stages were smaller and located in the outer parts of the festival area. The main artists mostly performed on the Loop Stage. Since the theme was Neon Dreams, the visual effects were full of neon colours and of course included some fireworks.

Friday started off with lots of glittery and excited people waiting in a long line. The whole area was basically a big pond because of the raining earlier, but that didn’t kill the vibe. Staff had done a lot of work to pump out the water and clean the area. On the Loop Stage Alan Walker opened the festival, and was followed by Don Diablo and Armin van Buuren. The duo performing for the first time in Finland gathered a lot of crowd. Rae Sremmurd had released their most popular song Black Beatles just last year and had reached a lot of listeners around the world. The masked DJ Marshmello performed as the second-last artist (of the Loop Stage) of the night. And last but definitely not least, another duo again for the first time in Finland, The Chainsmokers. In the middle of the show it started raining, but it didn’t stop the cheerful audience, some of which were having the time of their lives. In fact it just gave everyone more energy; jus cooling the jumping and dancing masses down.

As for the other stages on Friday, The Dome had most artists performing, and the WKND Stage had least. WKND Stage had for example: Inna and Teflon Brothers. The Future Stage had among others Dillon Francis, GTA and Alok. The Dome had more finnish artists like: Alex Nieminen. The Digital Stages artists included Wasted Penguins and Code Black.

The first artist of Saturday on the main stage was Reino Nordin, followed by Tungevaag & Raaban. These artists got everyone excited for the second day, making the crowd forget the muscle pain from the previous day’s jumping. Clean Bandit - also for the first time in Finland -rocked the stage next. Pendulum performed next, with a whole different vibe. And another masked DJ: Deadmau5 brought an energetic end to the line up.

During Saturday the other stages were filled with artists like the iconic Icona Pop, the finnish rap-artist Mikael Gabriel and lots of other artists like Cheat Codes, Kungs and Mike Perry in addition to some other Finnish artists.

As usual, the festival area provided lots of food spots for getting some fuel for the day. For the adrenaline junkies there was the possibility of bungee jumping from a crane, which many took either solo or with a friend. For others who no appetite for a jump but a will to fly, a ferris wheel offered a great birds eye view to the Loop Stage.

To see all the excitement and fun, take a look at the Weekend Festival 2017 aftermovie.

The American DJ and production duo The Chainsmokers were in Finland for the first time. The members are Alex Pall 32 and Andrew Taggart 28. Alex is the DJ and Andrew is the producer, writer and vocalist of The Chainsmokers. They met in New York in 2012 when Alex was already a part of the group, Andrew was informed that there is a spot open in the group since an old member named Rhett Bixler had left. Alex had grown up DJing and Andrew had taken an interest in it too.They started off making remixes of indie bands, and later moved to making collaborations and original songs. Their breakthrough was the song “#Selfie” witch reached the Dance/Electronic Songs chart in 2014.

Mikael Gabriel is a Finnish rap-artist born Feb 25, 1990. He started his career in 2007 as an Idols Finland participant, but did not make it to the show. After that he decided to become a rap-artist and singed a deal with Helsinki Freedom Records in 2008. A lot happened since, and in 2017 he had his first tour and was a judge in X-factor Finland together with Michael Monroe, Saara Aalto and Suvi Teräsniska. His most famous songs are for example “Kipua”, “Timanttei”, “Älä herätä mua unesta” and “Viimeisen kerran”.