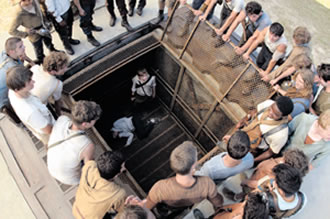 Like the book that inspired it – the first of a trilogy that includes The Scorch Trials and The Death Cure – The Maze Runner movie is one heck of a cliffhanger. If the theatre had been selling tickets to the next instalment of the dystopian thriller (already greenlighted by 20th Century Fox, although no release date has been set), I would have bought one before I left the lobby.

That's about the worst thing I can say about the film: It's not quite a full meal. But if the soup course is as satisfying as the salad, I'll gladly wait a year for the next serving.

As incomplete as the narrative is, The Maze Runner delivers on almost every other level. Directed by Wes Ball, a creator of animated shorts and visual effects making his feature debut, the adaptation of James Dasher's novel is visually stylish, suspenseful and original. Ball has described the film as Lord of the Flies meets Lost – a somewhat grandiose-sounding pedigree that turns out to be surprisingly apt.

The Maze Runner is set inside a bucolic compound surrounded by a massive wall. Known as the Glade, this village of thatched huts and hammocks appears to be a prison of sorts, inhabited by a gaggle of apparently amnesiac adolescent boys – Gladers – who have, over the course of their mysterious, three-year incarceration, developed a highly regimented tribal social structure featuring assigned jobs.

The most elite of these is the job of Runner. As it turns out, the wall conceals a maze, the door to which opens every day between sunrise and sunset. During daylight hours, Runners – and no one else – are tasked with exploring the maze's contours, mapping them while looking for an exit. It's a job made more complicated by the fact that the maze changes configuration while they sleep, and more dangerous by the fact that its corridors are patrolled by monstrous, spiderlike sentries called Grievers. Part machine and part muscle, Grievers will kill anyone who gets stuck inside the maze after dark.

Into this dead-end scenario lands a boy named Thomas (Dylan O'Brien). He's the latest inmate to arrive via the subterranean freight elevator that ascends, once a month, into the middle of the Glade, carrying one more kid who can't remember anything except his name, along with another 30 days' worth of supplies.

But something is different about Thomas, as several of the other boys note.

This observation, in and of itself, makes Thomas sound exactly like the hero of every other teenage drama. But Thomas isn't especially fast, smart, strong, talented or brave. In fact, he's just as scared as everyone else, as he tells us. Yet he's also so willing to question the status quo that, three days after his arrival, Thomas defies the Gladers' rules and enters the maze, where he not only survives a night inside, but comes out having killed a Griever.

The sequences set inside the maze are viscerally claustrophobic, yet Ball evokes a visual mood that's closer to the interior of a cathedral. The filmmaker has a knack for chills and thrills, ratcheting up the stakes and excitement every time Thomas – who is quickly recruited as a Runner after he discovers a previously unknown portal – steps inside the maze.

But the movie is about more than a puzzle, or the Gladers' search for answers to the questions of who put them there and why. It's a parable about the power of curiosity. As the saying goes, curiosity may kill the cat, but without it, how are you going to kick down the door onto the next of your nine lives?

The Maze Runner defies expectations on several levels, not the least of which is its avoidance of the now seemingly requisite teen-romance subplot. Although a girl (Kaya Scodelario) shows up in the Glade soon after Thomas does, there is, refreshingly, no canoodling, merely an understandable perplexity among her male peers, who have been living so long in their enforced man cave that they've forgotten what anything else feels like. "Are all girls like this?" asks one of the youngest boys (Blake Cooper) with a tone of reverence and awe, as the new prisoner showers her cohort with a barrage of rocks, mere minutes after climbing out of the elevator.

So do they get out?

That would be telling. And given the torque of the twisty ending, it isn't a yes-or-no question either. Sure, The Maze Runner unravels a few mysteries, but it spins even more. Thomas, as it happens, isn't the only one dying of curiosity here. As the closing credits roll, you likely will be too.