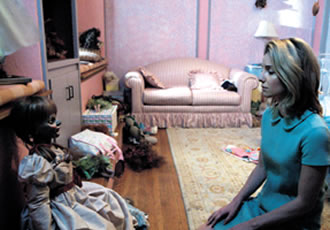 It is an article of faith in moviehouses, if not in the various houses of the Lord, that demons are always clamouring for your mortal soul. Hollywood has never adequately explained what exactly these fiends mean to do with it. Presumably, our human essence is packed with unholy phytochemicals that the demons need to survive, like some supernatural form of kale.

That tenet lies at the heart of Annabelle, a spinoff/prequel inspired by last year's The Conjuring. The villain in the new movie — a creepy doll that played an incidental role in the plot of that earlier (and far superior) horror film — is a conduit for a spirit whose state of malevolence, and apparent malnourishment, compels it to try to scare up a little soul food.

The result is a disappointingly derivative dish.

Working from a silly script by Gary Dauberman (writer of the straight-to-video Blood Monkey), director John R. Leonetti borrows a little too liberally from the dog-eared demon-doll cookbook, serving up a platter of half-baked cliches seen in everything from Magic to Child's Play and beyond, all spiced up with lazy jump scares of the sort that have been used a hundred times before.

When it comes to visuals, the director has a modest flair. Leonetti is the longtime cinematographer for horror master James Wan, having worked with him on four of the director's films, from Dead Silence to Insidious: Chapter 2. Here, Wan acts as producer, but his oversight isn't enough to fix the problems with his sous-chef

Set in 1970, the story centres on John and Mia (Ward Horton and Annabelle Wallis), a married couple who, along with their new baby, are terrorized by an antique doll, the hideousness of which is apparent to all but the protagonists. "Where did you find her?" squeals Mia with delight, after John presents his wife with something that resembles a ventriloquist's dummy in drag that's been left out in the rain for too long. "Do you know how long I've been looking?"

Really? Looking for this freak show, with a face like a gargoyle? The thing would pull a shank on you from under its petticoat the minute you turn your back. And you're going to put it in the baby's room?

John and Mia soon start experiencing run-of-the-mill poltergeist phenomena: phantom popcorn bursting into flame on the stove, poor television reception, a sewing machine running in the middle of the night.

Not exactly blood-curdling stuff, even though Leonetti tries to make it so. He's more successful in insinuating that every supporting character in the film might be the antichrist, pumping up the creep-out factor in a book shop owner (Alfre Woodard), a boy next door (Gabriel Bateman) and the police detective (Eric Ladin) investigating the attacks by Satan worshippers that open the film.

Ah, yes, Satan worship. At least that plot point goes somewhere. Which is more than you can say for the little boy (who seems to be clairvoyant, but aren't they all?). He gets introduced but is never explained and soon is forgotten.

But the biggest hole is the one at the centre: What does the devil want with the baby's soul?

Despite its deficiencies, Annabelle is not without a modicum of verve. It has its unnerving moments, but they're outweighed by the sheer stupidity and predictability of the story. It's not a movie for connoisseurs of horror, but for more susceptible sorts, those content with a fast-food approach to fearmongering.

"The devil preys on the weak and the vulnerable," Mia says, reading aloud from the occult reference guide that she consults when Beelzebub himself starts making house calls.

So do movies such as this, which pander like the dickens.