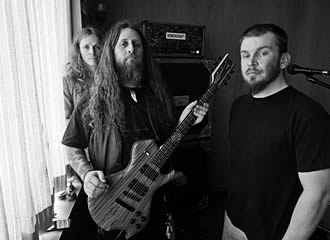 US outfit Yob have never been ones to conform to the restrictions placed by the demands of a casual listener. With the majority of their songs clocking in at well past the ten-minute mark, it's safe to say that it may take a while before mainstream radio embraces them.

Formed in Eugene, Oregon in 1996, the trio initially drew on the influences of frontman Mike Scheidt, whose love of Sleep, Cathedral and Black Sabbath oozed through the thick barrage of riffs they soon produced.

Debut full-length Elaborations of Carbon dropped at the turn of the century, followed by sophomore effort Catharsis in 2003. Subsequent buzz saw them signing to Metal Blade Records and the classic two-punch of 2004's The Illusion of Motion, and 2005's masterpiece The Unreal Never Lived was unleashed on music fans.

As they steadily built up a loyal fanbase, their appeal did not go unnoticed by their peers, with Tool drummer Danny Carey proudly sporting their tee-shirt in a number of promo pics for the prog metallers.

A subsequent hiatus ensued, just as the band was teetering on the verge of breaking out on the world scene. Refreshed upon returning after some line-up changes, the band released the well-received The Great Cessation, with its epic title track making waves.

The band's sixth album ATMA dropped in 2011 to significant critical acclaim. The line-up of Scheidt, drummer Travis Foster, and bassist Aaron Reiseberg then set out on lengthy tours of the US and Europe, as the trio's reach expanded even further. A supporting gig with Tool in the US saw their exposure grow even wider.

Recently released the aptly titled Clearing the Path to Ascend sees them return to Europe for a comprehensive tour. Touching down in Finland, they are performing at Tavastia on Tuesday 16 September.