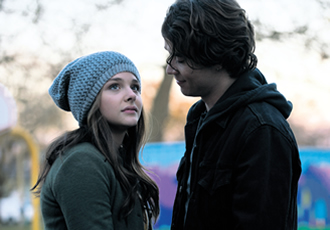 Viewers who luxuriated in a good cry after The Fault in Our Stars may be gratified to know that it's not time to stop sobbing. The perfect bookend to a tear-stained summer, If I Stay has arrived in theaters with the same good taste, modest cool factor and shameless tear-jerking that made its predecessor such a multi-hankie hit.

If I Stay, which was adapted by R.J. Cutler (A Perfect Candidate, The September Issue) from Gayle Forman's novel, hews largely to the same formula as The Fault in Our Stars: An attractive young couple grapples with first love and looming mortality against a scenic backdrop, the mechanics of sexual awakenings safely couched in soft-focus ellipses ("Adam, I've never..."). As in The Fault in Our Stars, this story is told from the point of view of an exceptionally self-aware young woman staring down impending death. Here, though, she's anxiously watching over herself as she lies in a coma, trying to decide whether life is still worth living after nearly losing it and everything else in a horrifying car crash.

It's a maudlin, potentially mawkish setup, but first-time feature director Cutler and his screenwriter, Shauna Cross, put an amber glow on even the toughest aspects of a story in which everything is just about perfect (until it most decidedly isn't). Chloë Grace Moretz plays Mia Hall, a 17-year-old cello prodigy whose happy, laid-back life with her former punk-rocker parents is upended when she meets a handsome guitarist named Adam (Jamie Blackley). Their mildly piquant romance — she idolises Yo-Yo Ma, he's more of a Ramones guy — is of the classic opposites-attract variety, spiced by dashes of O. Henry's lyrical irony. At a Halloween party, eager to please each other, she dons a platinum wig as Debbie Harry and he comes dressed as Beethoven.

It's all played for minimum dramatic tension and maximum aestheticised wish fulfilment, heightened by Cutler's tendency to film everything slightly out of focus and Cross' to write fuzzy-wuzzy dialogue like "Adam, that song was great." Even more idealised is Mia's family, headed by a mum and dad who clearly trained at the Pitchfork School for Cool Hipster Parenting. Played with warmth and easy understatement by Mireille Enos and Joshua Leonard, Mia's 'rents casually name-check Iggy Pop and Kim Gordon as they roam around their brightly painted Portland bungalow, bedecked with the requisite number of cred-signifying posters and musical detritus. It's all too flawless to be believed — we never see Mia argue with her parents, much less with her Alice Cooper-quoting little brother — but the colourful, cosy domestic portrait makes it that much more unsettling when, on a snowy road one day, it all comes to a shatteringly violent end.

If I Stay toggles between two worlds: Mia's desperate, barefooted sojourn at the hospital and flashbacks to the life she may or may not decide to leave behind. Although the emotionalism begins to drag the narrative down as her anguished vigil goes on and on and on, Cutler smoothly navigates Mia's double-sided experience, albeit in a way that recalls the Nashville episodes he has directed more than the ethereal otherworldliness of, say, The Lovely Bones.

Moretz, best known for her spiky, moodily effective turns in such tough films as Kick-Ass and Let Me In, submerges her most interesting contours in service to a blandly edge-free character. Blackley is slightly more convincing as the sweaty, discreetly pierced frontman of an on-the-rise, safely pseudo hard-rockin' band.

Granted, the group isn't channelling Joey Ramone as much as Clear Channel's pop heartthrob du jour. But the musical sequences — including an impromptu Smashing Pumpkins jam in Mia's back yard — bring some welcome verve to talky scenes of soulful heart-to-hearts and teary hand-wringing. Rest assured, there's plenty of that, too, in If I Stay. But even at its most wrenchingly painful, the film readily delivers generous dollops of pleasure.