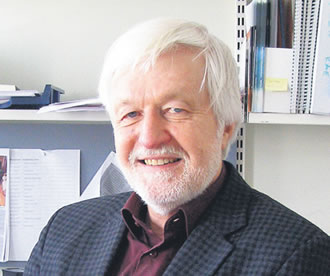 Is it true that firstly you were interested in Russian language as a form of personal rebellion against your parents?

Yes, that’s true. During that time, studying Russian was considered to be communist. Frankly speaking, I didn’t have any political convictions, but for me it was a form of protest. My father was a Lutheran priest and I was a good child. Then after school I wanted to shock my family, but they never condemned me for it.

Earlier, only left-wing parties and fringe politicians might have supported the idea of studying Russian language in Finland. How is the situation changing at the moment?

In this respect the situation has changed dramatically. In the Soviet time, it is true, only left-wing politicians endorsed partnerships with Russia and studying its language. However, now, the right-wing party Kokoomus and Elinkeinoelämän Keskusliitto (The Confederation of Finnish Industries) are favouring Russian language. This is because they realise that it helps Finnish business.

In my point of view, the glaring example of the trend are President Sauli Niinistö’s efforts to study Russian.

Of course, but he is not the only one − Mauno Koivisto, as I know, was able to read and even studied Russian history in Russian and is still doing it. I also worked with a woman who was Tarja Halonen’s Russian teacher when she was between the ages of 25-30. And Niinistö is interested as well.

He does his best.

The Finnish government has realised the importance of knowing Russian in Finland. Is that true?

Yes, some 15 years ago our Minister of Education Olli-Pekka Heinonen – a wise and far-seeing person – took part in a meeting with his counterparts from the Eurozone. When it came to Russia, everybody asked him - “You are truly familiar with Russia. Please, inform us about what is happening there”.

At that moment Heinonen realised that, if we have such a reputation, we should capitalise on it. When he returned home he started establishing the Aleksanteri Institute, a state-financed independent centre of Russian studies. I held the office of the Vice-Rector at that time, and I know this story very well. From that time the institute has been actively functioning.

We have a lot of specialists on Russia. This is the field in which we are a “superpower”, if I may coin a phrase. In other research fields our contribution is, on the global scale, about one per cent, but in Russian studies it is about five per cent. There still are some gaps in our knowledge on Russia, for example, we have too little research and specialists on Russian law and market analysis.

You also have a new centre of excellence on Russian modernisation. What can you say about that?

Indeed, the centre was established after a very hard competition for a special six-year grant at the Academy of Finland. The Centre is a joint effort of several actors. The activities are coordinated by Aleksanteri Institute. Getting the status and resources of a centre of excellence is an indication of the high level of Russian studies in Finland. There are six group leaders in the centre: top-level researchers in sociology and political studies. I am in charge of the cluster on philosophical and cultural interpretations of Russian modernisation.

But as you once mentioned, regardless of an impressive amount of theoretical and academic knowledge, ordinary Finns do not know very much about their Eastern neighbour.

Not only regular people, knowledge produced by researchers does not often reach even policy-makers and businessmen. It is a global problem that the academic world tends to live “separately” from the outside society. Personally, I see the knowledge transfer as an important part of my job. I often hold speeches for varied audiences covering, for instance, topics about the differences between Finns and Russians.

In an attempt to convey this theoretical knowledge, you offered to inaugurate an annual Russian fair to exchange ideas.

It is not a fair as such, in Finnish it is gathering around “venäjä osaaminen”. It is difficult to translate, it is more related to a think-tank on Russia and knowledge. The idea is to summon politicians, officials, researchers, businessmen and head-hunters who are interested in Russia, and to share visions and knowledge.