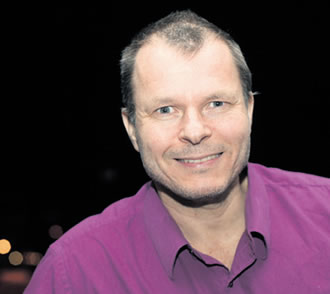 Finland tends to be considered a fine example of linguistic minority rights. The situation of the Swedish speakers is sometimes even mentioned as a model for other countries. If one looks at the fastest growing minority, however, the image of linguistic dreamland is less rosy. Is there a collective denial of the fact that Russian language has become an increasingly important part of Finnish reality?

As the number of Russian speakers will only get bigger, the Finnish mindset about Russians needs to change. There are all kinds of things to be done, but I will now make just one practical proposal. Finnish schools should teach every child the basics of the Cyrillic alphabet.

There has been a lively discussion in Finland about Russia in recent months. It has often been pointed out that we need more Finns who speak fluent Russian. I very much agree. My proposal, however, is not about full-scale language studies for some. It is about a basic civic education for all.

Finnish attitudes toward Russia include both admiration toward Russian culture and fear due to security concerns.

They also include racism. While the range of opinions is broad, there are barriers of otherness that prevent many Finns from having a more confident and relaxed feeling about Russians. One significant obstacle is the perceived strangeness of Russian language.

From a Finnish perspective, there are languages that seem to have a mysterious alphabet covering an equally mysterious vocabulary. Even if I learn the alphabet or Thai, Arabic or Hindi, the feeling of otherness may not diminish dramatically along the streets of Bangkok, Cairo or Delhi. To be honest, here I am sure only about Hindi, as I once learned some basics of it, but let us now assume this is the case about many other languages that use a non-Latin alphabet. In Russia, however, learning the alphabet has different results.

Walking the streets of Moscow, having recently made an effort to learn the basics of the Cyrillic alphabet, I had an eye-opening experience. There were so many words around that at once started making sense. Uncovering the alphabet cleared up some of the mystery. Of course, I did not suddenly speak Russian or have any comprehensive understanding of the language. Yet the environment seemed less strange once I could spot teatr, restoran, bank, universitet or telefon where before I had only noticed an alien script.

Talking about the experience to fellow travelers with similar experiences in Russia, I have become increasingly convinced of my proposal. Being able to relate to the Russian context even slightly better would be beneficial for Finland. Compared to the benefits, my proposal demands only a minor curricular adjustment.

Learning the basics of the alphabet would not take many hours in the overall curriculum of the Finnish schools. Even in nine hours of class, one could have an elementary grasp. That means an average of less than one hour per year, though it could all be concentrated in a single study period. Some of the students might of course later forget almost everything whereas others could be encouraged to study the language itself. Most, however, would be better equipped to relate to Russia. Not fully prepared, but sufficiently to justify the small effort.

It is high time to think seriously about linguistic futures of Finland. Rights of Swedish speakers and Russian speakers should never be seen as a zero-sum game, but comparisons between the groups can be revealing. In total, there are still almost five times more Swedish speakers than Russian speakers in Finland. This may sound like a major difference, but we should recall that during the collapse of the Soviet Union, the ratio was seventy-five.

If instead of total numbers we look at the regional distribution of languages, the importance of Russian is more evident. Finland consists of nineteen regions. In all of them, except Aland, everyone needs to learn both Finnish and Swedish at school. At the same time, in fourteen of them it is Russian that comes next to Finnish as the second biggest language. While Swedish speakers mainly live along the coast, Russian speakers are more evenly spread in the country. Even in Satakunta, a west coast region facing Sweden, Russian today outnumbers Swedish.

Statistics can never be directly translated into rights. With this in mind, another curious comparison is that there are today over thirty times more Russian speakers than Sami speakers in Finland. Policy conclusions should certainly not include diminishing Sami rights that in fact need much reinforcement.

During the coming decades, the number of Russian speakers in Finland is likely to increase significantly. What will be the linguistic implications for school curricula, street signs or public sector employment requirements? My modest proposal is not meant to provide a solution to all these important questions. It simply pretends to increase understanding and break some of the otherness barriers.