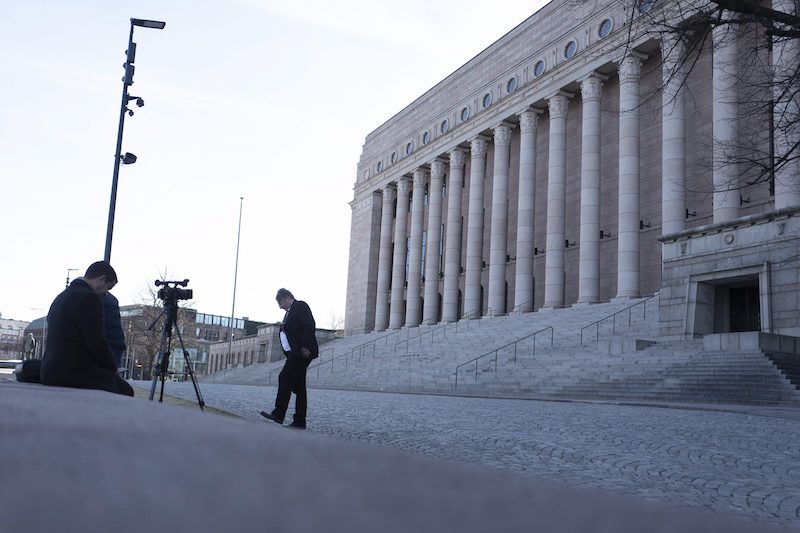 Journalists wait outside Finnish Parliament , during the debate to apply to join NATO , on April 20, 2022 in Helsinki. LEHTIKUVA / AFP

Finnish Public Service Media has the legal and professional mandate to reflect a diversity of opinions and provide an information platform that is not reflective of a political agenda. This is not happening with the English language Yle platform.

In their reports from the start of the Russian invasion of Ukraine until the end of April, 60% of their articles promoted a pro-Nato or pro-military alignment perspective. Conversely, less than 7% could be construed as being anti-Nato or anti-military alignment.

Indeed, when an anti-Nato perspective was presented eg with the articles on the 24th, 25th and 27th April reporting on the views of Erkki Tuomioja, Anna Kontula and Hassan Kaafi Halane every article was conditioned by the lack of support or critique of the person’s point of view. In the alleged opposition by the Somali community, they added the condition that such communities are exposed to high levels of conspiracy theories. Such negative conditionals were not evidenced in the pro-Nato articles.

Approximately 7% of the articles were reporting increased military expenditure and this excludes the procurement of military jets from the USA. Another interesting feature was the poll reporting conducted by Yle or business-sponsored groups that purport to show popular support for Nato membership. The objectivity of both is questioned.

Yle also reported that one of its own journalists was behind the second citizens’ initiative to parliament calling for Nato membership. I understood the mandate of Yle was to show impartiality in reporting and not advocacy in creating their own news agenda?

Research at the University of Helsinki by the ‘Emotions at Stake: Authority of the Media and Trust of the Audience’ (2019-2020) showed that Finnish media was having a greater impact on political decisions and opinions. Given that according to the University of Oxford and Reuters Institute, Finns trust the media more than any other nation, then questions should be raised on the impartiality and professionalism of the reporting during current times.

But why is this not happening? Could it be as Professors Lehtonen and Sajaavara noted in their landmark article – The Silent Finn, that this is a national characteristic. Why is there a lack of critical awareness of the ramifications of Nato membership? Perhaps the simplistic evidence provided by Yle confirms the basic tenets of Klein’s shock doctrine and the influence of hidden parties? What is happening with the relentless and expedited pursuit of Nato membership certainly has all the hallmarks of behind-the-scenes consultancy-inspired machinations. The incisive 2005 documentary ‘Our Brand is Crisis’ that looked at influence in another country’s domestic politics might give some pointers. The clue is in the title.

Irving Janis promoted the concept of ‘groupthink’ in which a group of people becomes subservient to the need to comply with consensus leading to dysfunctional decisions. If you then factor in the Finnish cultural traits of silent communication, the potential for false stability leading to cataclysmic outcomes is enhanced. This is what is happening over Ukraine.

I have solace when I am in the UK that there is an investigative journalistic cadre that holds decision-makers to account. Indeed, the citizenry prides itself in asking questions that sometimes come across as chaos personified. But perhaps democracy is chaotic or at least it should be.

But asking questions of Finnish decision-makers runs a health warning. I remember years ago in the fledgling TEKERI Trade Union, foreign teachers were sacked because they dared to question management in the private and public educational sectors. It still takes place and you raise questions you become the ‘troublemaker.’ Sipilägate comes to mind.

For those journalists wanting to think outside of the box, you might want to ask: Why is Ukraine still paying its debts off to Western banks even when it is at war? Where are the Finnish voices of opposition given such a paradigmatic shift in foreign policy? Do such levels of compliance and subservience show the functioning of democracy or a democratic deficit? Why are Finns regurgitating Western edicts, when for 70+ years they have successfully created their own zeitgeist that has been respected internationally?

There is a template for what Yle is doing and that is the BBC. Once regarded as the paragon of journalistic integrity and professionalism, it is now seen with contempt by vast swathes of the British population because of its London-centric agenda and lack of balanced reporting. It is only a matter of time before they will lose public finance and their journalists will have to face the realities of the marketplace. However, Yle is protected through direct taxation and feel they are impermeable to unwanted change. That is what the BBC believed. The only saving grace for Yle is that the audience goes to the default of groupthink consensus rather than critical awareness. But when groupthink prevails it destroys the organisation or the society it infects…sooner or later.

Graham Wood has been a lecturer at the University of Helsinki for over thirty years. He gained his Executive MBA from Aalto and his PhD from the Faculty of Social Sciences at Helsinki University where he researched conflict and collective violence. He is also a Fellow of the Higher Education Academy in the UK.