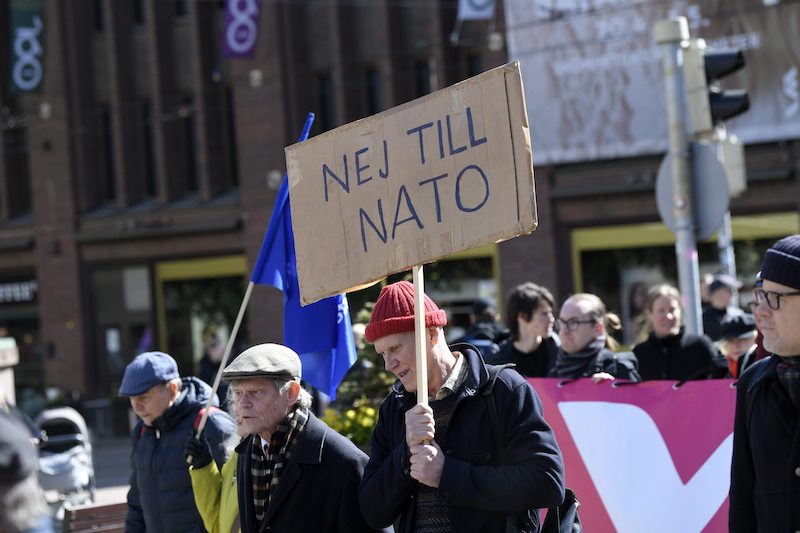 Nej till NATO -text in a sign at the Left Alliance Labour Day march in Helsinki on May 1st 2022.

It's deeply unfortunate that even some MPs in the Left Alliance are now publicly advocating Finnish membership of NATO.

An Atlanticist hybrid of US power and British ‘diplomacy’, NATO is a deeply pro-capitalist and imperialist organization. From the start, it has used the ideology of an external enemy – first the USSR, now Russia – to attack and repress socialist ideas and politics at home and in what were once the colonies.

This includes the use of extreme violence against the left, as in the case of the far-right 'stay-behind' terror networks (‘Operation Gladio’).

This is once again what we are observing today, as a proud West European socialist tradition of opposing militarism and advocating peace, neutrality and non-alignment is scandalously maligned as a pro-Putin fifth column – an ‘enemy within’.

As a result, genuine opposition to Russia’s war against Ukraine is now being channelled away from diplomacy and into a belligerent politics of heightened militarism and NATO-fuelled escalation. In other words, a staunchly neoliberal politics of humanitarian imperialism, one reminiscent of the thinking that brought us the wars in Serbia, Afghanistan, Iraq, Libya, and Yemen.

Such escalatory actions are less concerned with advancing the interests of ordinary Ukrainians than with displacing capitalism’s myriad crises – economic, social, political, and ecological – into militarism and war. That’s why our rulers speak of Russian ‘oligarchs’ but still hypocritically refer to ‘entrepreneurs’ at home.

But you can't resolve any of the real problems and crises generated by capitalist exploitation by stoking inter-imperialist rivalry. Finland joining NATO will be perceived by Russia as what it really is: an aggressive act of military alignment with the rival imperialist bloc commanded by the US and encompassing, notably, a remilitarising Germany. They will respond in kind as night follows day. The dynamic of geopolitical-military escalation is really that simple.

Ironically, Finland is moving further away from military non-alignment – a policy which has historically served it so well – even as the Russian military fails to conquer Ukraine and has shown zero interest in invading Finland.

It’s funny how many people are so keen to cast joining NATO is an assertion of Finnish national sovereignty. How exactly is turning the country into a US neo-colony on the European frontier of the American empire an assertion of national independence? If anything, it's an erosion of sovereign autonomy.

This erosion of sovereignty will undoubtedly have consequences. But those consequences won't be borne by Washington or its London satellite in their grand strategy to buttress western global hegemony against Russia and, much more importantly, China. After all, they don't share a long border with either country.

Finland’s national interest shares no overlap with these maniacal warmongers and the untold death, displacement, and suffering their 'humanitarian interventions' have caused.

As usual, NATO helps stoke the conflicts it then claims to be responding to by creating a less stable and secure environment that crowds out the possibility of meaningful diplomacy. The US and UK governments don't care about Ukraine. They don't care about Finland.

That doesn't mean Finland has to remain ‘neutral’ to Russian aggression in Ukraine. But it is clearly an incredibly foolish act to cede sovereignty over military and diplomatic decision-making to the US and UK – countries that have a clear interest in stoking conflict with their imperialist rivals.

Putin might be the gift that keeps on giving to US-led Atlanticism but surely this ability to respond to Western provocations in an escalatory and militaristic fashion is itself a crucial dimension of the regime’s essentially reactionary nature. Putin’s horrific crimes don't excuse the western powers and NATO of their own horrific crimes, which are counted in the blood of millions.

That’s why we need Russia out of Ukraine but also NATO out of Europe. This means moving towards a continent that is militarily non-aligned and committed to peace, diplomacy, and disarmament at home and abroad.

Kyle Bailey is a PhD candidate in the Department of Politics at York University in Toronto.