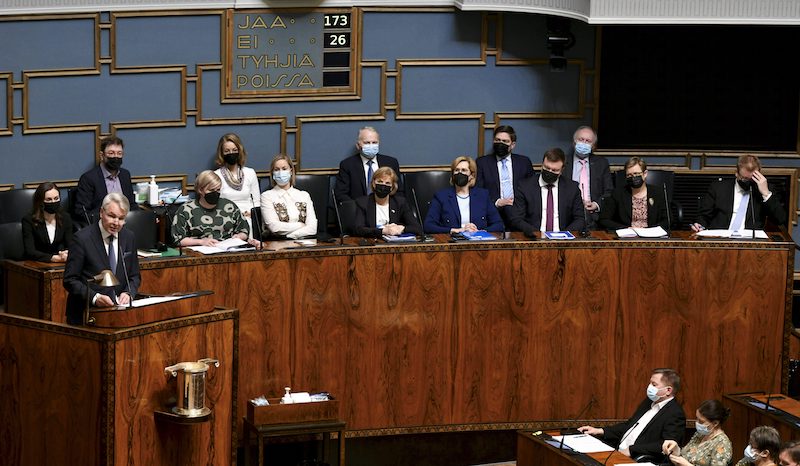 Foreign minister Pekka Haavisto speaking at a plenary session about NATO membership in Helsinki on 20th of April 2022.

The events in Ukraine have opened a debate in many countries about NATO membership, with Russia already threatening peace in the Baltic region. Scotland’s First Minister, Nicola Sturgeon, has expressed her intention to hold a referendum on Scotland’s independence by the end of 2023. If she is serious about holding a referendum by then, NATO alignment is something that Scotland must consider carefully over the next year.

The tensions in Ukraine have opened up the question as to whether or not NATO membership is vital to the defence of those countries standing against Putin’s Russia. If Putin threatens to absorb those nations into the Russian Federation that were once not just part of the Soviet Union, but also part of the earlier Russian empire, then Finland is right to be concerned. Putin has instigated the NATO question himself by demanding a ban on Ukraine joining, just before he invaded.

As the Helsinki Times pointed out last week during the meeting of Finnish and Swedish policy-makers, many are looking to see the process of Finland joining NATO conducted swiftly. Clearly, Finland is beginning to see the benefits of the NATO alliance, especially in Article 5. Known as the commitment clause, Article 5 would invoke a joint response from member countries if Finland’s eastern neighbour attacked them. A response that would otherwise not be guaranteed, even from other Nordic nations.

Scotland will likely have to face a similar debate when it comes to its future, particularly within the SNP given they are the largest party and have had a past of changing attitude towards NATO membership. The position of the Green Party in Scotland which is now aligned with the SNP complicates this further, as they have a strongly negative view of NATO.

With the violence in Ukraine, the question is pressing. Even more so given the concerning claim from the UK’s defence secretary that Russia has sought to influence the debate surrounding Scottish independence in the past. The reasons for this are impossible to know for sure. One could hazard a guess that Putin seeks to instil a general sense of political instability as he has done in several other countries.

Perhaps Putin follows the same argument that those against Scottish independence do, that it would weaken UK security by putting Trident, the UK’s nuclear programme, at risk. The Scottish National Party has always supported removing Trident from Scotland, where it is currently located. Over the years, the estimated costs of relocating it have been eye watering, leading some to speculate that it would likely be abolished in the case of Scottish independence.

This would likely pose a huge problem for NATO, as trident is one of the organisation’s most powerful assets. NATO’s secretary-general Jens Stoltenberg reinforced this in a television interview for BBC. He stated, “Part of the UK contribution to NATO is of course the UK nuclear weapons – the nuclear deterrent – which contributes to the overall nuclear deterrent of NATO, which is something that is important for NATO”.

The argument regarding the relocation of Trident is redundant. The estimated figures for the cost of relocating Trident have always varied, but if the UK believes a nuclear deterrent is vital then any cost would be worth considering. Also, whilst Stoltenberg’s statement may imply to some that the removal of nuclear power may impact Scotland’s standing with NATO in the case of independence, ridding Scotland of Trident altogether should not affect its ability to join NATO. Iceland has been a long-standing member and does not even maintain any form of standing military.

Much like Finland, Scotland must consider new options regarding the future of its defence in the form of NATO membership. Russia interfering in the independence debate is very worrying, but it should not be the reason we fail to hold a democratic referendum or even influence the way we vote in it. We should work proactively to address security concerns so that Putin does not obtain one of his ultimate goals, and that is to suppress democracy.