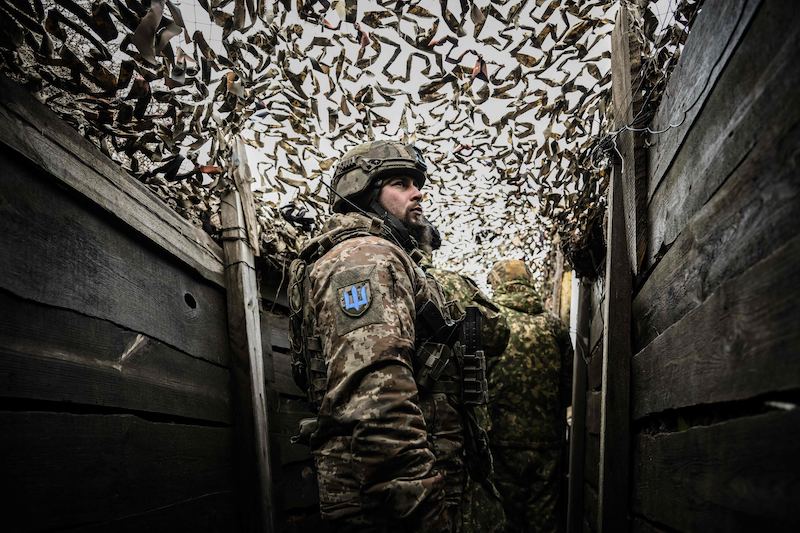 Ukrainian troops patrol at the frontline outside the town of Novoluhanske, eastern Ukraine, on February 19, 2022. LEHTIKUVA / AFP

At this point in my life, I've been consistently opposed to war for about twice as long as I spent as a Marine infantryman (with precisely the attitude toward war you would expect). The change was incremental and took a few years, but I consider my decision to march in the streets against the 2003 US invasion of Iraq to have been moral, and my decision to march in formation toward participation in the 1991 Gulf War to have been immoral.

Every international conflict tests that conviction: Will THIS be the one war that makes me reconsider and conclude "hey, THIS war, unlike any other I've witnessed, is unavoidable, necessary, and just?"

The Russian invasion of Ukraine is not that war.

Like all other wars in my lifetime (I was born during the US misadventure in Vietnam), this one is a violation of every worthwhile human value, a brawl between overgrown street gangs with delusions of grandeur. It was avoidable, it is unnecessary, and it is unjust.

Where I find myself in disagreement with many who oppose this particular war but have supported others is the notion that there are any "good guys" to be found among the political decision-makers who brought this conflict upon us.

There's been quite a bit of harrumphing and table-thumping in UN, EU, and NATO circles over the invasion as a "violation of Ukrainian sovereignty."

"National sovereignty" is a prettified way of saying "mutual respect between authoritarian gangs' for each others' turf claims." That respect goes right out the window any time one gang wants something and another gang won't hand it over.

Putin's playing by the same rules they've set for themselves. Their problem with him isn't that he's breaking the rules. It's that his goals conflict with their goals. They're special and entitled, he's gauche and disreputable. They've got a classy country club, and he showed up in spandex shorts and a Slayer t-shirt.

My sympathy, in this conflict as for all others, is reserved for the non-combatants caught up in the gangs' turf disputes, not for the gangs themselves, or for the gangs' grandiose "sovereignty" claims.

If you prefer peace and prosperity to war and poverty, none of these people are your friends.