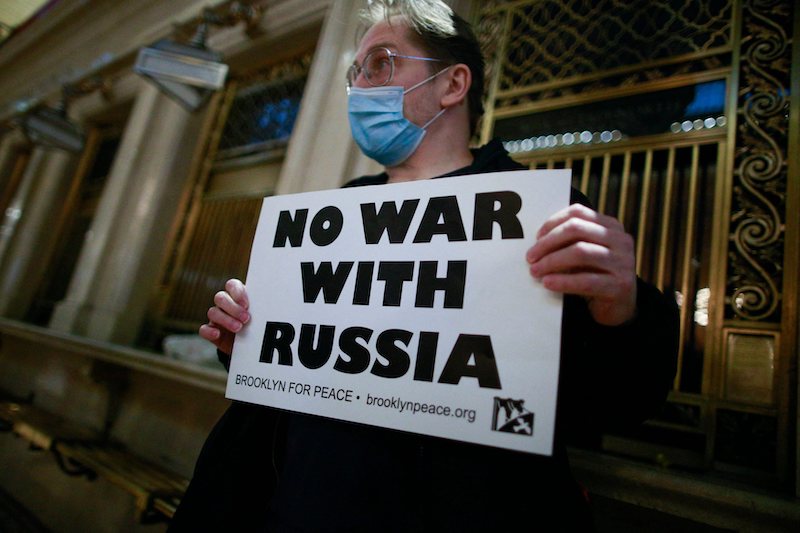 A demonstrator holds a sign during a protest to oppose a US war with Russia over Ukraine at Grand Central Terminal in the Manhattan borough of New York City on February 19, 2022. LEHTIKUVA / AFP

After weeks of unsuccessfully attempting to either bully Russia's Vladimir Putin into submission or bait him into war, US president Joe Biden may finally be looking for a face-saving exit from of the Ukraine "crisis" of his own making.

Reuters reports that Biden, at the urging of French president Emmanuel Macron, is willing "in principle" to hold a summit with Putin. "We are always ready for diplomacy," says White House Press Secretary Jen Psaki.

Unfortunately, it's US "diplomacy" that brought the US, Russia, Ukraine, and NATO to the current standoff.

As the Warsaw Pact disintegrated and the Soviet Union collapsed, US encouragement for those events included pledges that the North Atlantic Treaty Organization wouldn't take advantage of the situation to expand eastward. Since then, NATO has inexorably pushed in that direction, nearly doubling the number of member states. Thanks, US "diplomacy."

Things began coming to a head with the US-sponsored coup in Ukraine that replaced its "Russia-friendly" regime with a "US/Europe-friendly" regime in 2014, courtesy of Barack Obama. Thanks, US "diplomacy."

Then the US went into overdrive (courtesy of Trump and Biden) against the opening of a pipeline (Nord Stream 2) which would have supplied Russian natural gas to Germany. The pipeline would have been a force for peace insofar as Russia likes to sell natural gas (at a fraction of prices the US can offer), and Germans like to not freeze to death. To flip and paraphrase an old maxim, when goods are crossing borders, armies usually aren't.

Putin finally drew a red line at NATO membership for Ukraine specifically, and against the US definition of "diplomacy" -- "do exactly as we demand, without question or objection, and we may consider deigning to allow you to kiss our feet for a little while before kicking you in the face again" -- specifically.

Bullies really, really, really hate to be told "no," and tend to go into full bluster and posture mode at the first hint of that happening, which explains the Ukraine "crisis."

Unfortunately for THIS bully, Putin remains seemingly un-frightened. Even as the US and its poodles met in Munich, of all places, to issue more threats, he declined to play the role of Neville Chamberlain.

So now Joe says he may be ready to talk. Whether the willingness is real, or just another exercise in fake "diplomacy," remains to be seen. As does whether Putin will give Biden a graceful/deniable way out of this mess, or insist on rubbing his nose in the thick layer of filth US "diplomacy" has previously deposited on the ground.

With two nuclear powers at loggerheads, the stakes are far too high for further attempts to disguise US hubris and megalomania as "diplomacy."