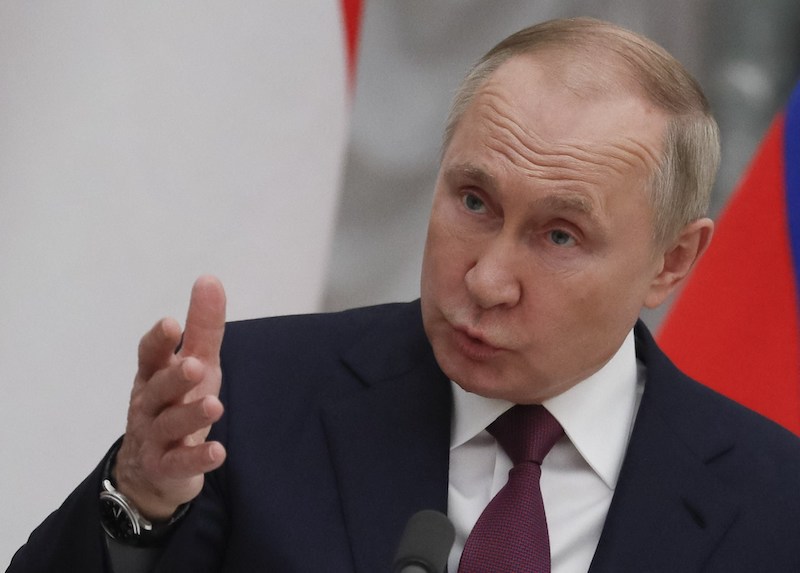 Russian President Vladimir Putin talks during a press conference with Hungarian Prime Minister after their meeting at the Kremlin in Moscow on February 1, 2022. LEHTIKUVA / AFP

Idealism is often an admirable quality when a person or movement is fighting for a good cause, an idea. What constitutes a good cause is however something subjective, and can be judged differently from one time to another. Movements with high ideals have shown themselves to be anything but good when the ideals are put into action. Even communism and fascism thought they themselves represented high ideals.

The escalation along the Ukrainian borders evokes emotions and many questions about motives. Why is Russia threatening a large-scale war? The most common interpretations we hear refer to spheres of power, buffer zones, the fear of a democratic neighboring country and the phantom pains of a super power.

Perhaps it may shock some if I nevertheless ask the question: Is Vladimir Putin’s military preparations and threatening rhetoric really grounded in a romantic idealism? With the addition: a misdirected one. Many analyzes have been made regarding Vladimir Putin’s path from KGB-chekist, and secret agent to head of state with increasingly unchecked power. A number of these analyzes are standing on my bookshelf, others I have read reviews of.

Many of these documents refer to Putin’s interest in Russian history and its foreground figures, emperors, militaries, philosophers, and historians. Dimitri Peskov, Putin’s long-lasting, voluble spokesperson, and propagandist said in 2011: “Putin is always reading about Russian history. He reads memoirs of historical Russian heads of state.” Putin is not alone in this; many other Russian leaders have sought inspiration in the story of “the eternal Russia”, and it’s exceptional mission.

What have Putin’s historical studies resulted in? Well, in a long article published in July 2021. It is a threatening and aggressive document in which history is rewritten and interpreted so that Ukraine appears as an artificial creation without historical justification. One can, if one wants to, call it a test of historical idealism, where all the facts allegedly argue that Ukraine and it’s Slavic people are, and must be a part of the Russian sphere. Anything to the contrary can be considered anti-Russian provocations.

Putin's final plea does not hide it’s aim: “I am convinced that true Ukrainian sovereignty only is possible in partnership with Russia.” This almost seems generous, as he previously has established that large parts of today’s Ukraine do not belong to the country at all, referring not only Crimea and Donetsk-Luhansk, but to larger parts of the country. Actually, the text must be seen as a declaration of war against the present Ukraine, the majority of its people, and its elected leadership. Nothing but a regime change is sufficient for Putin. Ukraine must be incorporated into the Russian sphere of interest, politically, economically, and culturally. If not by choice, then...

If one wants to trace Putin’s ideological sources, one ends up with the Great Russian philosophers of the 19th century who laid the ground for the Russian state doctrine, the Russian idea. Orthodoxy, autocracy, and the people were it’s cornerstones. Strong slavophile elements were included, which Finland also experienced around the turn of the century. Slavophilism, the idea of the unity of the Slavic peoples, is a central component in Putin’s plea: there are Russians, Belarusians, and Ukrainians, but they are nonetheless the same people, united by history, religion and blood.

One of Putin’s revealing arguments is that if the USA, Canada, Germany and Austria can agree to cross-border co-operation, why then can’t Russia and Ukraine? He forgets that the former group of states share democratic values, while the latter two have drifted apart.

Agressive nationalistic idealism leads to conflicts, especially when nation states’ right to outline their own path is being openly questioned. Moreover, when other motives clearly are a part of the calculation, it is a question of crude chauvinism and a misdirected and destructive form of idealism.

The Russian idea is on the march.

Pär Stenbäck is a minister