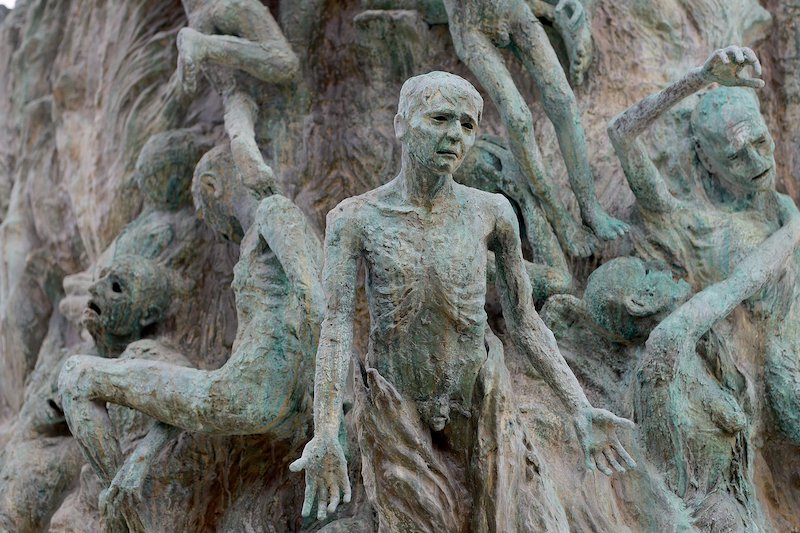 Part of a statue by artist Kenneth Treister depicting the victims of the Holocaust at the Holocaust Memorial Miami Beach on International Holocaust Remembrance Day on January 27, 2022. LEHTIKUVA / Getty Images / AFP

The Holocaust, Goldberg said, is "not about race. It's not. It's about man's inhumanity to other man."

She characterized the Nazis and the six million Jews they murdered as "two white groups of people."

Oddly, Goldberg's construction is partially correct insofar as it tracks pretty closely to the modern identification of race as "a social construct." The term "white" originated specifically as an identifier for persons not permitted to be held as chattel slaves, and Jews of the European diaspora did generally fall under that definition, despite the many other persecutions they suffered.

On the other hand, the Nazis certainly defined "Aryan" and "Jewish" as racial categories in their own "social construct," so Goldberg was in error as to the attitudes involved. Like the proverbial Facebook relationship status, "it's complicated."

But there's also a bigger question involved here. Who "owns" the Holocaust when it comes to claims of historical or current victimization?

While Jews, whatever their "race", constituted a plurality of Holocaust victims, they weren't the only victims, or even the majority of the victims.

They also murdered nearly twice as many others, including (per Wikipedia) non-Jewish Russian civilians, Soviet prisoners of war, Polish Catholics, Serbs, disabled people, Romani, Freemasons, Slovenes, homosexuals, Spanish Republicans, and Jehovah's Witnesses. Some of these murders were predicated on racial or ethnic grounds. Others weren't.

But even that positive aspect is continually tarnished in one of two ways.

One is inapplicable invocation: For nearly any political cause, someone's nearly certain to cite the specter of the Holocaust as an analogy to their travails. In doing so, they often, though not always, abuse the memory of the dead to score trite, trivial, or simply inaccurate political points.

The other is inapplicable claims to sole ownership of Holocaust victim status by organizations (and states) claiming to represent the Jewish people.

"No @WhoopiGoldberg, the #Holocaust was about the Nazi's [sic] systematic annihilation of the Jewish people -- who they deemed to be an inferior race," tweeted the Anti-Defamation League's Jonathan Greenblatt."

As Greenblatt continues, right after distorting the Holocaust, "Holocaust distortion is dangerous."

Any time the Holocaust gets compared -- credibly or not -- to any issue that doesn't bear directly on the Jewish community, Greenblatt and others can be counted on to raise the rooftops, demanding that such comparisons only be made in support of their preferred causes.

There are good and obvious historical reasons for Jews to take an ongoing interest in the Holocaust, and to be especially energetic in opposing an encore of any kind.

Those good and obvious reasons don't justify Greenblatt et. al's assertions of monopoly ownership, or of veto power over the use of Holocaust analogies to current events.