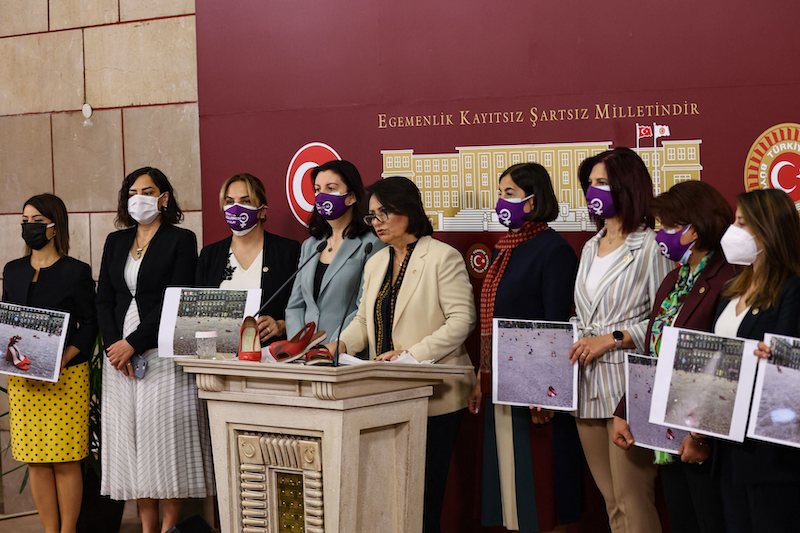 Turkey's opposition Republican People's Party (CHP) members of parliament hold a press conference, to protest against the withdrawal of the Istanbul Convention on preventing and combating violence against women, at the parliament in Ankara on May 26, 2021. LEHTIKUVA / AFP

On March 20th, the Turkish government issued a presidential decree nullifying Ankara’s commitment to the Istanbul Convention, the landmark international treaty on the rights of women and girls.

"The Council of Europe Convention on Preventing and Combating Violence Against Women and Domestic Violence, shall be terminated on the part of Turkey.” read the decree, which was disseminated via run media.

The Convention which was signed by Turkey in 2011, was the culmination of more than a decade of work by European Union agencies to develop a framework to combat violence and abuse directed at women. The articles of the Convention focus mainly on preventing domestic violence, protecting victims, and prosecuting accused offenders. The other central topic in the treaty is the prohibition of sex-based discrimination. Article 4 of the text states that “the implementation of the provisions of this convention by the Parties, in particular measure to protect the rights of victims, shall be secured without discrimination on any ground such as sex [or] gender.”

Turkey’s leaving the Convention after over a decade of being a party to it, came as a surprise, both to Ankara’s international partners and to Turkish citizens.Turkey’s president, Recep Tayyip Erdoğan, recently announced that the decision to leave the Istanbul Convention was taken unilaterally by him, despite the fact the treaty was adopted by the country’s Cabinet as a whole. "This is not a decision to be taken by the parliament. The step that the Presidency took is completely legal," Erdoğan told reporters in İstanbul. "We have made the decision to exit, and notified them about the situation. So, this is a done deal."

The announcement by Ankara has triggered immense backlash and international condemnation. Human rights groups around the world spoke out against the move, calling the cancelling of the Convention a terrible regression for women in Turkey. Many have called on Turkish authorities to rescind on the withdrawal. “Exactly ten years after it was signed, women are speaking today with one voice to demand that the Turkish authorities reverse a decision that will put the safety and even the lives of millions of women and girls in peril,” said Amnesty International’s Secretary General, Agnes Callamard.

The decision also drew criticism from Turkey’s allies. Shortly after the decree was issued, U.S. President Joe Biden condemned Turkey’s “deeply disappointing” decision to pull out from the landmark European convention. “Countries should be working to strengthen and renew their commitments to ending violence against women, not rejecting international treaties designed to protect women and hold abusers accountable,” Biden said of the convention, ironically named for Turkey’s largest city. “This is a disheartening step backward for the international movement to end violence against women globally.” Similar responses were heard from the  Strasbourg-based Council of Europe, the E.U.’s main human rights body.

“This move is a huge setback and all the more deplorable because it compromises the protection of women in Turkey, across Europe, and beyond,” Marija Pejcinovic Buric, the council’s secretary-general, said in a statement.

Many observers, both in Turkey and without, see the nixing of the Istanbul Convention as the continuation of a troubling trend within the country in recent years. Once a deeply secular state, Turkey’s government under President Erdoğan has for years been promoting an ultra-conservative religious agenda, affecting countless areas of Turkey’s domestic policy. Barely a month ago, Turkish authorities caused a national uproar when they imposed a three week ban on the sale of alcohol. The ban, which was meant to prevent alcohol consumption during the month of Ramadan, was imposed even on grocery stores, who were required to cordon off liquor sections. Many vendors have been quick to point out that the ban was only the most recent measure in the government effort clamping down on alcohol, which has for years made it increasingly difficult for stores to obtain liquor licenses.

The slew of fundementalist agendas entering Turkish policy, from education reform, to regional diplomacy has come to a head on the issue of women's rights in the country. Turkey’s political opposition has for long called attention to the efforts of Erdogan’s ruling Justice and Development Party (AKP) to underestimate, ignore, or outright deny the gravity of gender-based violence and femicides in Turkey. Indeed, misogynistic and derogatory statements by AKP members, including Erdoğan himself, have led to outright violence targeting female elected officials. The most recent incident took place on 21 May, when Meral Aksener, Good Party leader and outspoken critic of AKP traveled to the Black Sea province of Rize. Aksender was accosted by a mob of Erdogan supporters, and had to be rushed to the safety of her vehicle by her aides. In all, some sixty incidents of assault against opposition officials have been identified over the past two years, many of which can be plausibly linked to Erdogan’s shameless anti-female rhetoric.

In light of this long trend, it vital to view Turkey’s withdrawal from the Istanbul Convention for what it is: the latest move in Recep Erdoğan’s program to transform his country from a secular republic to an Islamist one.

"I'm an Eindhoven-based geopolitical analyst specializing in Middle Eastern affairs. Before becoming an independent analyst, I've worked as a consultant for clients in private-sector, Netherlands-based companies."