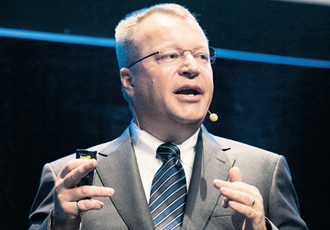 Canadian CEO of cellphone pioneer is leading a turnaround effort of epic proportion.

The café area in Nokia’s NOK-N slick, airy headquarters in Espoo, hard by the Baltic Sea just beyond Helsinki, houses a display that traces the evolution of Nokia’s mobile phones. One of the first, from 1985, is portable in the same way a cement block is portable. With a power source the size of a car battery, it weighed 15 kilos and cost in the neighbourhood of $10,000.

Shortly thereafter, the Nokia revolution started. The phones got ever smaller, affordable and innovative. By 2003, Nokia was rolling out (primitive) internet tablets with touch screens and durable little handhelds with dirt-proof keypads and 30-day standby time.

By the middle part of the last decade Nokia was the undisputed global leader in mobility and Scandinavia’s proudest corporate son. The tech giant, once better known as a maker of tires, rubber boots and cables, was responsible for 4 per cent of Finnish gross domestic product, 25 per cent of its exports, 35 per cent of its R&D and fully one-third of the value of the Finnish stock market.

The party ended in mid-2007, when Apple’s iPhone landed with the force of a nuclear bomb. After a period of denial inspired by arrogance, Nokia went into crisis mode and a global search was launched to find the ultimate Mr. Fix-It. He came in the unlikely form of Stephen Elop, a tech geek bred in little Ancaster, Ontario, now part of Hamilton. To say that few CEOs face a greater turnaround challenge is like saying Greece has a little debt problem in need of a cure.

This article was first published in The Globe and Mail on 23 March 2012, and is licensed for republication in Helsinki Times.