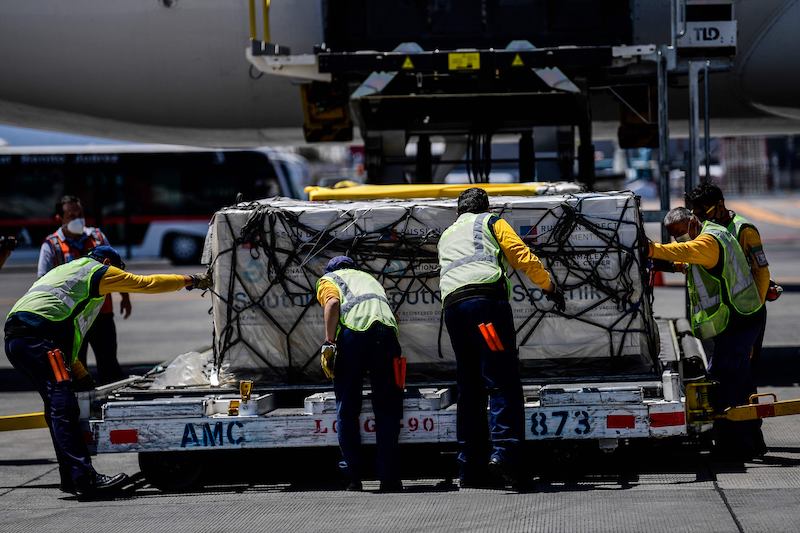 Workers unload a container from a plane of Aeromexico airline carrying the second shipment of the Sputnik V vaccines against COVID-19 from Russian Gamalei laboratory, upon arrival at Benito Juarez International Airport in Mexico City on March 10, 2021. - Mexico received a shipment of 200,000 doses. LEHTIKUVA / AFP

As the number of laboratory-confirmed Covid-19 infections peek in Finland, the country is going into another shutdown. Over 400k people have already received the first shot of a two-shot vaccine, but the rate of vaccination has altogether been disappointing. Finland, with 12.38 administered doses per 100 people is in 23rd place globally, after countries like Lithuania and Slovenia.

The new British and South African variants are spreading fast and already over half of the new infections in the greater Helsinki area are of the British mutation, which both spreads faster and causes a more severe disease also in younger people. Both Moderna and Astra Zeneca vaccines deliveries are dragging. Astra Zeneca has informed the EU Authorities, that less than half of the agreed vaccines for May- June 2021 will be delivered to the European Union. Vaccine producing companies have attributed the sluggish delivery to production problems, but it would not be surprising if it would turn out that countries who bid a higher price, such as Israel and UAE were prioritised at expense of the shiftless European Union.

Prejudice and bias have had a huge effect on how the Covid-19 pandemic has been handled. The virus was politicised early in its spread. Western countries - upholding a false sense of immunity-  reacted very slowly to repeated warnings from the WHO. It was a “Chinese virus” after all. Previous outbreaks of SARS and MARS had been contained in the area and had not spread to Europe or the USA. Lack of preparation of the west was obvious and a fundamental cause of the speedy spread of the virus.
Now that prevention is at hand, prejudice and geopolitical bias must not be allowed to dwindle society’s protection. Let science speak and shut geopolitics out of it.

By this, I am referring to the hesitation of Finland and other western countries in approving and benefiting from the Sputnik V vaccine.

Sputnik was the first vaccines to be developed and one of the first to be independently audited as well. The vaccine was registered in Russia on 11 August 2020 and received emergency usage authorisation. Over 7.5 million doses have been administered in Russia and more in over 40 other countries. The effectiveness has been determined at 92% for protection against mild disease and 100% against sever Covid-19.

Sputnik has been developed at The Gamaleya National Research Center for Epidemiology and Microbiology of Russia. Founded in 1891, Gamaleya is a globally respected research institute in its area. The center possesses a unique collection of viruses and has its own vaccine production line. The Gamaleya Center has previously successfully engineered and registered two vaccines for the Ebola fever using adenovirus vectors.

Sputnik V has already been authorised in 44 countries worldwide as of March 4, 2021. India is producing 300 million doses. Russia applied for the vaccine approval in the European Union in January, while several EU countries, such as Hungary and Slovakia, approved its use earlier.

Sputnik V does not need extra low temperatures for transportation and storage and the cost of each dose is just $10, half of the Pfizer & BioNTech vaccine ($20) and almost one-fourth of the Moderna vaccine ($37). Side effects have also been less significant. The Sputnik V vaccine is based on a well-studied and often used method of using human adenovirus vectors. The spike proteins of the Sars-Cov2 virus have been enveloped in a harmless Adenovirus, which delivers them into the receivers cells.
This method invented first in 1953, has been tested globally in over 250 clinical studies over the last two decades. Using adenovirus vectors has been proven to be safe, efficient and has not had negative long term effects.
Denis Logunov, Russian Academy of Science associate member and leader of the Sputnik Vaccine development group and his colleagues, reported the results of their phase 3 trial of the vaccine in The Lancet on Feb 02, 2021, “The development of the Sputnik V vaccine has been criticised for unseemly haste, corner-cutting, and an absence of transparency. but the outcome reported here is clear and the scientific principle of vaccination is demonstrated, which means another vaccine can now join the fight to reduce the incidence of COVID-19.” writes the Lancet.

Russia has already offered to provide Finland with the technology to produce the vaccine here in the country. Considering the mounting problems in the availability of the western vaccines, why aren’t the authorities doing what ever they can to make this happen?

In a press conference on 12.3. Tuija Kumpulainen, Director General from the Ministry of Social Affairs and Health addressed the issue of the Sputnik vaccine and said that Finland will follow the EU and wait for the vaccine to get sales permit from the European Medicines Agency (EMA). “Some EU countries have emergency approved and acquired this vaccine, but Finland’s position is that we will not acquire it before it has the (EU) sales permit, because If a drug does not have sales permit, there will be no compensation mechanism for adverse effects,” she stated.

This argument is irrational, at a time when the country is going into another shutdown, which will cost us over one billion euros per week. One week of having the country open will pay for hundreds of thousands of adverse effects if any.

On March 4, the EMA announced it had started a rolling review of data from trials of Sputnik V in the first step in its approval process. The EU applicant is R-Pharm Germany GmbH. It may take a while before the sales permit is issued and even after that EU bureaucracy will take over.
Under EMA rules, national regulatory bodies can grant vaccine licences for emergency use. Hungary, another EU state, has already begun using the Sputnik V and Chinese Sinopharm vaccines.

The vaccine has been licensed for production in South Korea, India, and Brazil. Additionally, production agreements have been signed with companies in Germany, Spain, and  France, which are subject to EMA’s approval. Adienne, an Italian-Swiss pharmaceutical company has signed an agreement to start producing Sputnik V from July.

Pandemic is not about politics or geopolitics. It shouldn’t be. People’s lives and livelihoods are in questions. In a situation when the government is even considering a curfew as the number of infections increase dramatically, it would be irresponsible not to consider all means available, including the Sputnik V.