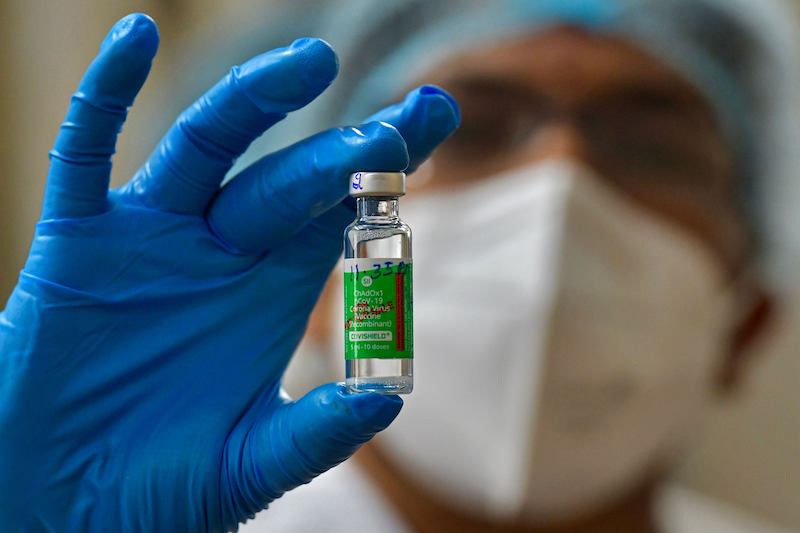 A nurse displays a vial of Covishield, AstraZeneca's Covid-19 coronavirus vaccine made by India's Serum Institute, as she prepares to inoculate her colleagues at the KC General hospital in Bangalore. LEHTIKUVA / AFP

It is a little more than a year that the coronavirus was first detected in the city of Wuhan in China. The first case outside China of a woman who had arrived from Wuhan was reported by World Health Organization (WHO) in Thailand on 13th January. This development should have set alarm bells ringing but the WHO kept maintaining that there was no cause for concern nor was there any need to stop flights from Wuhan/China as this would be tantamount to stigmatizing a country and its people.

Within a few days, authorities in the US, Nepal, France, Australia, Malaysia, Singapore, South Korea, Vietnam and Taiwan confirmed fresh cases. It was only on 30th January that WHO declared the coronavirus a global emergency as the death toll and the number of infected cases surged in China. Simultaneously new cases were confirmed in India (first case on 30th January), Philippines, Russia, Spain, Sweden and the UK, Australia, Canada, Germany, Japan, Singapore, the US, the UAE and Vietnam. It was after a considerable delay that WHO declared the coronavirus to be a pandemicon 11th March 2020. By 5th October 2020, the WHO estimated that a tenth of the world's population had been infected with the coronavirus.

By the third week of January 2021, more than 98 million cases of coronavirus have been confirmed with 2 million-plus deaths. 190 out of 193 countries of the world have been affected by this virus. It is once in a century crisis, the like of which no one has experienced in her lifetime. It is not only a health catastrophe but has resulted in extreme economic damage and destruction in all affected countries. Some of the most advanced and developed countries have been hit the worst. Extremely prosperous and rich countries with well-developed health infrastructures have succumbed miserably to this disease. The most powerful country the USA with more than 25 million cases and 400,000 deaths account for more than 25% of the total number of global infections and about 20% of deaths while it has only about 4% of the world population. Several other developed countries like the UK, France, Italy and others have also experienced a similar fate.

As compared to many of the advanced economies, India’s performance has been exemplary. With its 1.35 billion population which represents about 17% of the global total, India accounts for 10 million-plus infections and 153,000 deaths. These represent less than 10% of the world infected cases and less than 8% of the recorded global deaths. Moreover, total cases and deaths per million population are about the lowest among major countries of the world. This is all the more remarkable since the health infrastructure in the country, particularly in the rural areas where most of the population lives, somewhat lacking.

Its shortcomings notwithstanding, India has been able to effectively and competently handle this challenge because of the steady, decisive and resolute leadership provided by Prime Minister Narendra Modi. He was successful in instilling confidence and inspiring the people to rise to the occasion. At the worst of times when the daily number of positive cases was fluctuating around 95,000 in September 2020, he kept a firm hand at the helm and continued to communicate with the common people, leaders and medical personnel in a calm, sober and persuasive tone.

While dealing with the pandemic through all the uncertainties and while focusing on the urgent necessity of wearing masks, maintaining a social distance of six feet, and regular and frequent washing of hands, the leadership of the country was equally conscious about the priority to be accorded to the development of vaccines to counter the virus till the time a cure of the disease is found. This has borne fruit. The Serum Institute of India (SII) entered into an arrangement with the Oxford University to manufacture the vaccine developed jointly by Oxford and British pharmaceutical firm Astra Zeneca. Another Indian pharmaceutical firm Bharat Biotech has also developed a vaccine to treat this disease. In addition to these two vaccines, approval for emergency use of which was obtained and vaccination drive rolled out in the country on 16th January 2021, several more vaccines by SII and other firms are under development and are expected to be released soon.

Even during the initial months of the disease, India, by virtue of the fact that it has emerged as the ‘’Pharmacy of the World’’ had ramped up production of medicines like hydroxychloroquine, paracetamol etc. and supplied them and medical equipment like PPE kits, ventilators and masks to more than 150 countries of the world. Keeping in view the fact that India produces 60% of all vaccines manufactured in the world, responsibility has devolved upon it to supply these vaccines to other countries, particularly developing countries. WHO has recently said that the developed countries have monopolized the Pfizer and Moderna vaccines for their own populations and are not making them available to developing countries.

PM Modi has stated on several occasions that India conducts its foreign policy on the maxim of ‘’Vasudhaiva Kutumbakam’’ (The World is a Family). He has promised that vaccines being manufactured in India will be made available to humanity across the globe, particularly to the poorer and developing countries. It is also felt that the prices of vaccines manufactured in western countries like Pfizer and Modena are prohibitively high. They need to be stored at temperatures of minus 70 degrees Celsius which would be unfeasible in under-developed countries. Transportation at super low temperatures to the inner parts and rural areas of these countries would be a difficult task.

Keeping in mind the ‘’Neighbourhood First’’ Policy enunciated by PM Modi at the beginning of his first term in 2014, Bhutan and Maldives became the first two countries to receive 150,000 and 100,000 Indian made vaccines respectively on 20th January 2021. Bangladesh and Nepal came next and received 2 million and 1 million doses respectively on 21st January 2021. Myanmar received 1.5 million doses, Seychelles 50,000 doses, and Mauritius 100,000 doses on 22nd January.

India’s vaccine assistance reached Nepal within a week of a request made by Nepalese foreign minister during his visit to New Delhi last week. While handing over the supplies to Prime Minister KP Sharma Oli in Kathmandu, the Indian envoy said this reflected “India’s Neighbourhood First policy in action”. Oli thanked Prime Minister Modi and the Indian government for the “generous grant of one million doses of Covid vaccine to Nepal at this critical time when India is rolling out vaccination for its own people”.

All these supplies have been made on a gratis basis. Several of these countries have also signed commercial agreements with SII, supplies according to which will be made in the coming days.

Regulatory approvals by Afghanistan and Sri Lanka are awaited to effect supplies to these countries. India has also conducted a training programme for its neighbours and allies to help them in the vaccination drive.

Brazil and Morocco, close strategic partners, also got 2 million doses each on 22nd January. Brazilian President Jair Bolsonaro thanked PM Narendra Modi for sending Covid vaccine supplies with a picture of Lord Hanuman bringing the holy 'Sanjeevani'. Thanking SII, the Brazilian Ambassador in Delhi tweeted: “Thank You @SerumInstIndiafor the amazing professionalism demonstrated while shipping this batch of #OxfordAstraZeneca vaccines to Brazil & immense appreciation for and thanks to the Government of India for their support.”

What has been particularly appreciated by observers is the speed` and selflessness with which India rolled out millions of doses as aid despite the massive requirements of its own vaccination drive. This will go a long way to enhance the credibility and trustworthiness of India in the world. While the world is witnessing the aggressive and threatening demeanor of China, the humane and caring attitude of India is evident in stark contrast. In the rapidly evolving geopolitical landscape in Asia and the world, the healing and supportive actions by India through the supply of Covishield and Covaxin vaccines will go a long way to promote peace, security, cooperation and prosperity in the region and the world. India’s ‘’Vaccine Diplomacy’’ or ‘’Vaccine Maitri’’ (Vaccine Friendship) has further strengthened its image as the first responder in all emergency situations. This is all the more commendable when there are only five countries in the world who have thus far been able to successfully manufacture anti-Covid-19 vaccines.

Ambassador Ashok Sajjanhar is a retired Indian Foreign Service Officer. He was the Ambassador of India to Kazakhstan, Sweden and Latvia, and has worked in diplomatic positions in Washington DC, Brussels, Moscow, Geneva, Tehran, Dhaka and Bangkok.