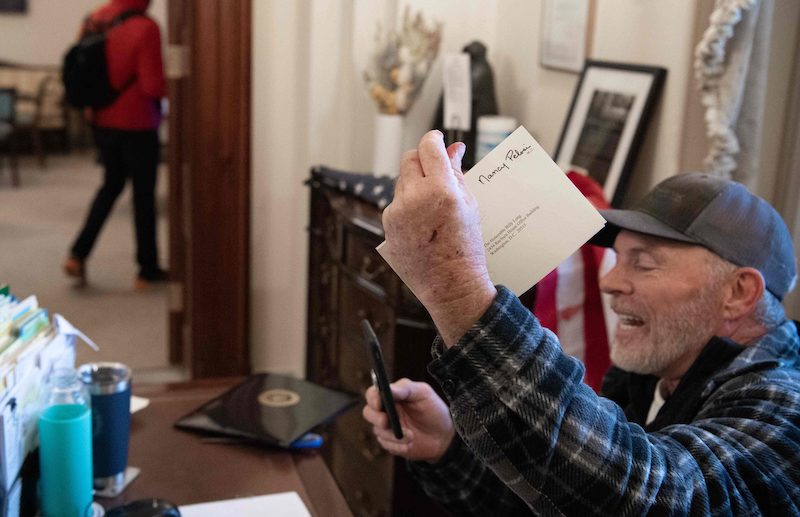 Supporters of US President Donald Trump sits inside the office of Speaker of the House Nancy Pelosi as he protest inside the US Capitol in Washington, DC, January 6, 2021. - Demonstrators breeched security and entered the Capitol as Congress debated the a 2020 presidential election Electoral Vote Certification. LEHTIKUVA / AFP

The recent videos coming from The United States Capitol in Washington evoke memories of images from history books; the French or Russian revolution, when the mob storm the dwellings of power, and desecrate its symbols. The big difference is that the intrusion now happened in one of the world’s oldest democracies, and it was called for by a president who, to the very end, has refused to secede power.

This leads to questions existential in nature: How strong is the democracy, not only in The United States, but also in those countries who call themselves democracies? Regarding theUnited States, we know that the astonishing incident is the result of a long process, where an elected president has been systematically sowing doubts about the legitimacy of the democratic system. That he, despite that, have the trust of close to half of all voters, is frightening considering the durability and constancy of democracy.

But there is also a brighter side, a more positive interpretation of the latest stage in the political polarization in the country. Political history teaches us that dramatic events which force decision-makers to pause and ask where this is leading, aresometimes needed. Crises have the ability to violently illuminate the alternatives; to eliminate the rhetoric and sharpen focus.

The insight that the destructive spiral could be fatal to democracy, seems to have afflicted at least a portion of the elected Republicans. If this insight persists, it could lead to Trump’s influence on “his” party diminishing. A lot depends on how the voters in the Republicans´ home districts react to the tumult at The Capitol. But the party remains harshly divided: An anti-Trump-phalanx with Mitt Romney, and a dogged pro-Trump with Ted Cruz in the vanguard.

Those who speculate about a division in the Republican party along those lines recently established during the congressional votes, will most likely be disappointed. Too many have invested their political future in the party to break with the apparatus now. But if Trump single-mindedly persecutes those who have “wronged” him, he could chase some out of the party.

Less than two weeks remain with an unstable president who has the nuclear weapons codes within reach. Focus has, ironically enough, been directed at vice-president Mike Pence, but also on The Pentagon: Can they stop executive orders made by a person who is obviously ready to promote chaos? He has sworn not to give up, even if he has been forced into a temporary retreat when his followers and accomplices began abandoning him. – Apparently, a psychiatrist is needed to predict his future behavior.

Will the situation stabilize? The outcome of the election in Georgia is now an important signal to the rest of the world as it gives Joe Biden a strengthened mandate to succeed with large parts of his reform program. A predictable policy can compensate for the huge prestige-loss suffered by the United States. If congress also could avoid voting with hair-thin majorities in large reform issues, it would stabilize the situation.

The four coming years will answer the existential question: Can the American democracy recover after these years of onslaught from within? The answer is important for democrats across the world.