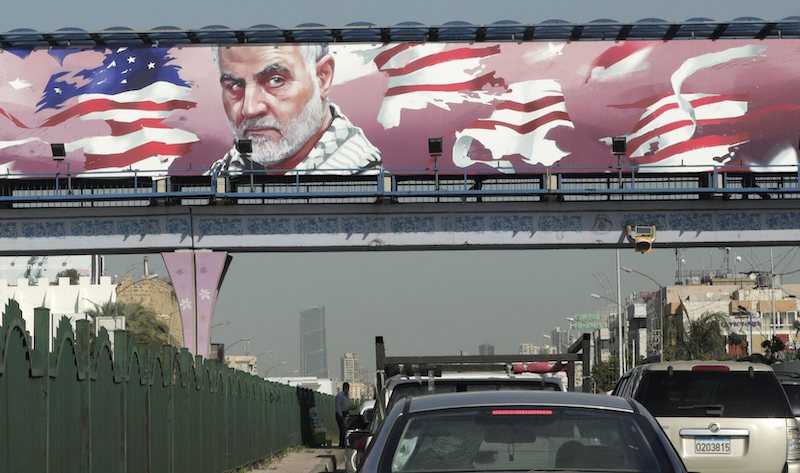 An overpass above the highway leading the Lebanese capital Beirut to the southern areas is pictured ahead of the first anniversary of the killing of Iranian Revolutionary Guards commander Qasem Soleimani (portrait), on December 31, 2020 / LEHTIKUVA / AFP

These days Iran honors the fallen hero, Martyr Major General Qassem Soleimani, the Commander of the Quds Force, an official branch of the armed forces of the Islamic Republic of Iran – and his companions, who were assassinated on the third of January 2020 at Baghdad International Airport.

For every Iranian and even those outside of Iran in countries who have suffered from terrorism, the name of General Soleimani signifies unmatched bravery, and selfless sacrifice against terrorism.

Throughout the last decade, our region has witnessed the rise of ISIS through their rapid advancements and occupation of territories, which involved countless atrocities against Christians, Yazidis and Muslims civilians. However, with the resistance made by a variety of courageous and devoted soldiers lead by Qassem Soleimani, ISIS's reign and terror came to an eventual end.

This brave and Godly man fought by his heart and soul against the Saddam regime’s invasion on Iran back in 1980 to defend his country against the invaders. Likewise, Soleimani decided to accept the formal request of the governments of Iraq and Syria for assistance and visited the high danger zones in person.

Soleimani’s assassination helped shine light on the Trump Administration’s true colors. The assassination on Soleimani was also a blessing for ISIS and other terrorist groups in the region, who welcomed his assassination, calling it “an act of divine intervention that benefitted them”. It is clear that the costs of this terror attack for the American government proved to be way higher than its benefits.

It weakened the fight against Takfiri terrorism in the entire region and the world, and also tarnished the process of managing the current conflicts and crisis in the Middle East. Soleimani sought to reduce tensions and differences within the region, and his last visit to Iraq was part of his efforts to resolve the tensions between Iran and Saudi Arabia’s relations.

The attack to assassinate Martyr Soleimani was a “terrorist act”, the legitimacy and legality of which cannot be justified on any ground or basis. The designation of a nation’s armed forces as a “foreign terrorist organization” is unlawful and cannot justify any threat or use of force against them.

The irresponsible policies and unlawful practices of the current US administration continue to not only endanger the very foundations of international law and order, but also pose a threat to overall global peace and security. The international community should not condone or tolerate this situation and must demand that the United States put an end to its continued unlawful and destabilizing measures in an already volatile region that is the Middle East, by withdrawing its forces from the region.

The United States has attempted to portray itself as an advocate for dialogue and peace in the region. It is clear that such an assertion is mere duplicity and void of any sincerity. The imposition of illegal and inhumane sanctions, especially in the time of the COVID-19 pandemic by the United States, as well as its other hostile practices against Iran runs contrary to such a claim.

Warning about any military adventurism or further acts of terror against Iran and Its citizens, Iran stresses the fact that it will not hesitate to exercise its inherent right to self-defense.

Recalling that the current insecurity and instability in the broader Persian Gulf region is the direct result of the unlawful invasion of Iraq by the United States in 2003, as well as its massive military presence and its “divide and rule” policy in the region, it is also worth noting that all the above mentioned threats, including to dispatch more troops and “brand new beautiful equipment” to this already volatile region, would indeed further complicate the current situation.

Likewise, the United Nations member states must condemn, in the strongest possible terms, the unlawful threats and unfettered policies of the United States government, and to also hold it accountable for all of its unlawful acts and practices while compelling it to abide by the principles and boundaries of international law.

Although the region has lost a crucial warrior for peace and stability, Soleimani’s legacy from his contribution to the Bonn Conference, and to a relentless struggle to rid the region of ISIS will live on the in region.

We will remember Major General Soleimani and continue to commemorate his acts of courage and bravery.

Ambassador of the Islamic Republic of Iran in Finland